It’s an unlikely setting for an ongoing night-after-night street protest.

However, hundreds of people have been gathering in Thurncourt Road, on Leicester’s Thurnby Lodge estate, for some weeks now to protest against an Islamic charity’s plan to turn a disused Scout hut into a community centre and prayer room.

On Friday, the number of people taking part swelled towards the 400 mark – with about 50 police officers there to oversee it.

BNP leader Nick Griffin made an impromptu appearance on Friday evening and, reportedly, again yesterday morning. According to eyewitnesses he was greeted with indifference.

Another issue which has arisen is that unfounded rumours have begun circulating through the internet. These include a claim that the neighbouring Anglican Christ Church had been asked to cover its cross for fear of offending Muslims.

Canon David Monteith, Acting Archdeacon of Leicester, said: “There is no truth at all in the malicious rumour that the church was asked to cover the cross. The information is totally unfounded.” 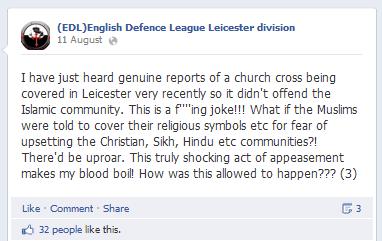