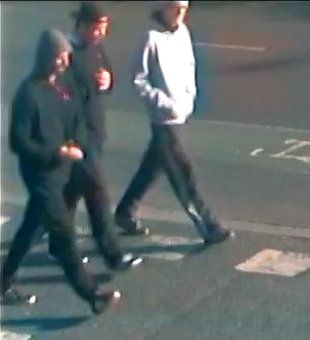 A thug spat at a woman in the street apparently because she was wearing an Islamic head scarf. Police have appealed for help tracing the man, who targeted the woman in Humberstone Road, near Leicester city centre.

The 20-year-old woman was walking near to the St Matthews service station when she noticed three young men approaching her. One of them spat on her as they passed by and the three began laughing as they walked away.

Officers have released a CCTV image of three people they want to trace. The incident happened shortly before 1pm on Monday, February 4.

Pc Dave Adams said: “The victim felt upset and frightened following the incident and feels that she was targeted because she was wearing a hijab.

“We will not tolerate people feeling intimidated and frightened on our streets and I would urge anyone with information to call us as soon as they can.

“The road was quite busy at the time of the incident so there is a possibility that passers-by and passing traffic may be able to help.”

The three suspects are white, 18 or 19 and of slim build. One was wearing a peaked cap and another was wearing a black hooded top.