One of the claims made by EDL leader Stephen Lennon (“Tommy Robinson”) in that appalling softball interview by Jeremy Paxman on Newsnight was that he knew nothing of Daryl Hobson, the EDL member who had revealed links between the EDL and Norwegian terrorist Anders Breivik. Lennon dismissed Hobson as just some “random” member of the EDL’s Facebook page.

Unsurprisingly, given Lennon’s record of lying, it turns out that relations between Daryl Hobson and the EDL leadership were rather closer than that. Here, courtesy of Hope not hate and Expose, are photos of Hobson with both Lennon and EDL co-leader Kevin Carroll.

Update:  You can sign Camden UAF’s petition protesting to the BBC about Paxman’s interview with Lennon here

Meanwhile Daryl Hobson’s Facebook page has been taken down, but not before a screenshot was obtained of this death threat to George Galloway, along with a threat of violence against the EDL’s opponents: 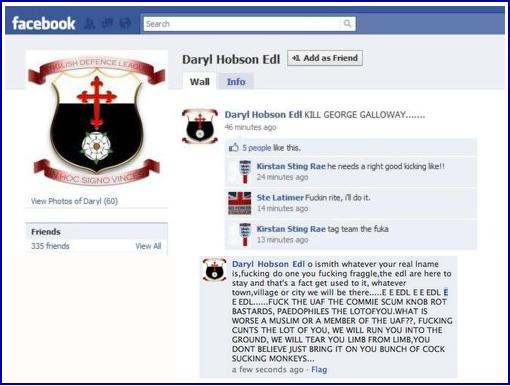