A Liberal Democrat candidate has refused to apologise for a series of shocking Islamophobic comments. Sick Dave Stones suggested a pork restaurant and a topless bar – named after Islam’s holiest city – should be built next to a mosque.

The would-be councillor, who is the party’s candidate for a by-election in Redcar and Cleveland on 19 January, said:

“Regarding the mosque being built near ground zero. I say let them build it. But then, across the street we should put a topless bar called ‘You Mecca Me Hot’ … and next to that a pork rib restaurant … Then we’ll see who’s tolerant.”

A number of posts on his Facebook page were seemingly calculated to deliberately offend Muslims – including spreading outright smears. Stones claimed that the Royal British Legion were “not selling poppies in certain areas of the UK”, implying that objections from Muslims were behind the decision: 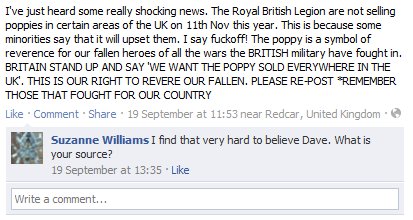 When contacted by Scrapbook, however, a spokesperson for The Royal British Legion said his claims about the poppies were“categorically not true”.