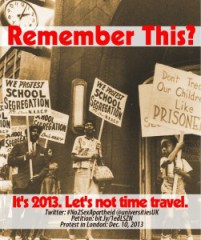 When Universities UK published its guidelines on External Speakers in Higher Education Institutions last month it can hardly have anticipated the outcry that would result.

The publication’s rather pedantic discussion of the possible legal implications of a hypothetical public meeting where gender separation was requested by a visiting speaker unleashed a wave of outrage, with UUK being angrily denounced for advocating a system of discrimination that was variously compared to the US South in the 50s or South Africa under apartheid (a protest last Tuesday evening outside the UUK headquarters in London “echoed much of what Nelson Mandela fought for”, wrote the Telegraph‘s Emma Pearce).

Education secretary Michael Gove (author of the Islamophobic tract Celcius 7/7) stepped in to accuse UUK of “pandering to extremism”. And by the end of last week media fury had reached such a pitch that the prime minister himself felt it necessary to intervene, with a spokesman stating that David Cameron “doesn’t believe guest speakers should be allowed to address segregated audiences”.

As a result of this furore, Universities UK has withdrawn the section of its guidelines that provoked the controversy, pending a review in consultation with its lawyers and the Equality and Human Rights Commission.

The campaign against so-called “gender segregation” has been characterised by hysteria, misrepresentation and outright lies. Given the prominent role played in stirring up the controversy by extremist organisations like Student Rights and One Law for All (one of whose leading figures was recently forced to resign after the exposure of her links with the far right), that is hardly surprising. But the way in which the mainstream media has eagerly embraced the narrative promoted by these fringe groups is a worrying sign of the grip that anti-Muslim prejudice has on wider society. When a controversy arises that involves Islam, it seems, evidence-based analysis and reasoned argument go out the window.

A case in point was a report by Channel 4 News on Tuesday evening, which coincided with the demonstration outside the Universities UK headquarters, organised by One Law for All. You can watch the report below. It opened with footage of an angry man gesticulating and declaring that he would not address a segregated meeting, while a voiceover informed viewers: “This was the moment one academic snapped. Professor Lawrence Krauss had come to debate ‘Islam versus atheism’, but not before a segregated audience. The clash dramatised a problem that has been quietly building on campuses – Islamist students insisting on meetings that separate men and women.”

The “clash” in question occurred at University College London last March at a public debate between Krauss and Hamza Tzortzis of the Islamic Education and Research Academy, who organised the event. You can read what happened at the debate here, here and here. The reality is that gender separation was not imposed at the meeting. The audience was divided into three sections – one for women who wanted to sit separately, another for men, and a third mixed-gender section at the front (see the timelapse video released by iERA). People attending the debate were free to sit where they chose.

Krauss threatened to walk out of the event after he saw two young men being escorted from the meeting by security staff because they refused to accept these seating arrangements. He mistakenly assumed that they had objected to the imposition of gender separation.

A spokesperson for iERA later explained that the two men were being ejected because they had forcibly tried to sit in the women’s section of the audience. As he told the Huffington Post: “When arguing it was about sitting in any area in the auditorium, they were offered an entirely free aisle in the aforementioned Muslim female section, but insisted that they wanted to sit in between the Muslim females, with a view to offending their religious beliefs.”

A Muslim woman who was at the debate confirmed that this was indeed the case:

“As a woman, I should have the choice who I choose to mix with. The organisers were accommodating to all – for those who wanted to sit separately, and for those who wanted to sit together. During the event, 2 men demanded to sit in the women’s section in between the women, after much discussion, the organisers cleared space for them to sit – (there were so many rows), while still trying to respect the position of the women who had requested to be seated separately. A man in particular demanded to sit in between the women in order to ‘challenge their beliefs’. How is this being tolerant? The men were intimidating and the organisers spoke in length to the individuals before asking them to leave as they showed complete disrespect.”

It should be added that we can expect further intimidation of Muslim women by militant atheists at such meetings. Maryam Namazie of One Law for All is currently assembling teams that will “go to segregated events and stop the segregation”.

The Channel 4 News report included a short clip from an interview with iERA’s Saleem Chagtai in which he said they would intervene at an event “if somebody insisted in sitting in a gender-only section, by way of protest or by way of making an obnoxious point” – which was obviously a reference to the two atheists who behaved so obnoxiously at UCL. But the rest of the interview, in which Chagtai would undoubtedly have explained what really took place at the meeting (as he did when he spoke to Radio 5 Live), was not broadcast. The makers of the report evidently preferred to suppress what Chagtai had told them in order provide viewers with an intentionally false account of the UCL event, in the interests of whipping up further hysteria over “gender segregation”.

The report was presented by Channel 4’s culture and digital editor Paul Mason, who is still supposed to retain some left-wing principles (he is the author of Why It’s Kicking Off Everywhere: The New Global Revolutions). As it was Mason himself who interviewed Chagtai – taking the opportunity demand “what gives you the right to bring this medieval religious view into universities that are based on logic and learning?” – it is difficult to believe that he was ignorant of the deception being practised in his report. Mason should be ashamed of himself.

The way the iERA UCL debate was organised, involving as it did an audience ranging from atheists to people with conservative Islamic beliefs, was a model of how the different religious and cultural needs that exist in a diverse society can in fact easily be accommodated at such an event. It also demonstrated that there is an arrogant and aggressive element among self-styled “secularists” whose supposed concern for women’s rights doesn’t prevent them from showing complete contempt for women who don’t share their atheistic convictions. Media coverage of the event also illustrates how a non-problem of “gender segregation” has been hyped up into a moral panic that assists the increasingly vicious depiction of the Muslim community as some sort of alien presence in “our” midst.