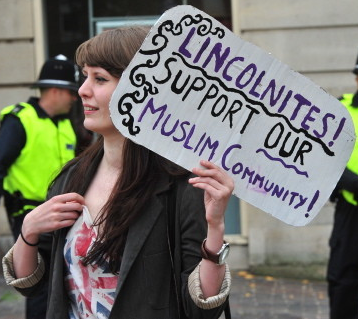 Anti-racist campaigners want to swell their ranks with a ‘rally against racism’ in the lead-up to a protest march in Lincoln next week.

Lincoln Against Racism and Fascism will hold the meeting to build support for its March Against Racism to oppose a rally by the East Anglian Patriots (EAP) group three days later.

Lincolnshire Police confirmed in November last year that the ESP, which demonstrated against the building of a mosque in Boultham Park Road in June, were planning to return this month. The previous demonstrations attracted hundreds of people to the city.

Spokesperson for the anti-racist group, Nick Parker, said: “This meeting will highlight our group’s continued opposition to far-right groups like the East Anglian Patriots and the racism that they try to spread in our city when their supporters shout disgusting slogans like ‘burn the mosque’.

“We will use this opportunity to give ordinary local people the chance to hear what we have to say and we appeal to everyone to join us in taking to the streets next weekend to peacefully demonstrate that we will stand up for our community when the far-right tries to divide us.”

The ‘Rally Against Racism’ is set for Wednesday January 15 from 7pm at Lincoln Labour Club, 32 Newland, Lincoln, LN1 1XG, behind the Odeon cinema.

The ‘March Against Racism’ will take place on Saturday January 18, assembling at 10.30am at St Martin’s Square at the top of the High Street, before the anti-racist protesters make their way down to Cornhill Square in the city centre.