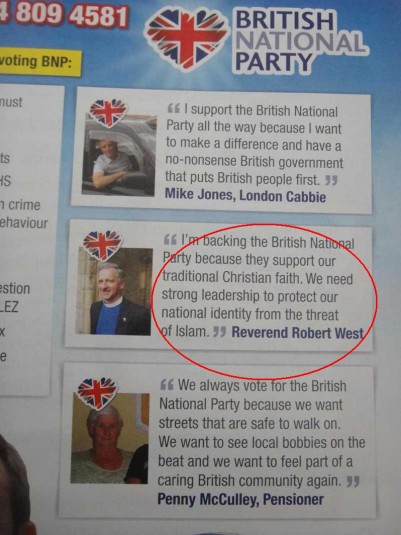 London Assembly member Murad Qureshi has written to complainabout the election address from the British National Party that appears in the booklet distributed by London Elects to inform voters about the 3 May elections for the London Mayor and Assembly.

The BNP’s appeal to voters features a quote from their phoney non-Reverend Robert West which reads: “I’m backing the British National Party because they support our traditional Christian faith. We need strong leadership to protect our national identity from the threat of Islam.”

The booklet is sent to every household in Greater London. It is quite disgraceful that London Elects has allowed the BNP to include in it an outrageous slur on one of the major faiths in London, where 8% of the electorate is Muslim.

Does anyone imagine that the BNP would be allowed to include an equivalent attack on the Jewish community in its election address? But bigotry is apparently considered acceptable when it is directed against Muslims. It is a measure of how Islamophobia has entered the mainstream and is now widely regarded as legitimate.

It is too late to withdraw the booklet, but London Elects should issue a public apology to London’s Muslim community along with an assurance that this will never happen again.

Update:  The quote from Robert West can also be found on the London Elects website, where the booklet itself is available for download. You can email them at info@londonelects.org.uk or phone 020 7983 4444 to complain.