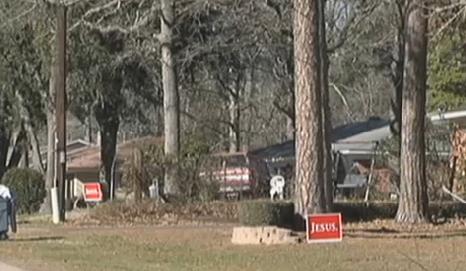 KYTX reports on resistance to the Islamic Centre of Longview’s plan to build the town’s first mosque, a relatively small structure which will be attended by no more than 40-50 people at a time. Needless to say, the objectors say they have nothing against Muslims, it’s just the noise and the traffic they’re worried about.

In response to the mosque proposal, some have erected “Jesus” signs outside their properties. However, this has nothing to do with hostility to Islam, but simply expresses their love of Christianity. As one mosque opponent explains: “The neighbourhood joined together and we put up the Jesus signs to support Jesus Christ in our church and our community.”

The paper reports that the “Jesus” signs are part of a promotion by the First Baptist Church and have been distributed by a local resident named Elizabeth Owens, who explains her opposition to the mosque as follows:

“It’s going to be, to us, foreigners. We’re not acquainted with that culture, and we have children and we have concerns, yes we do. I understand everybody has to worship, but why do they have to bring it to a Christian community? I think that’s terrible.”

It’s worth checking out the comments below the report. Some examples:

“The creeping fungus that is ‘Islam’ will begin the slippery slope we have stepped on and they will get all the help they need from their benefactor in the WH and his attack dog Holder. This will spread like a cancer and soon they will want to install sharia law to fulfill their dream of taking America and making it a cesspool like the places they come from.”

“I can’t believe that in this day and age, the year 2012, the 21st century, when we are all adults, Texans are STILL racist to the point of outright stating that the only reason they don’t want the Muslims to build a mosque here is because they are Muslims and therefore must be evil. Really? REALLY? This is how we act, still? I really shouldn’t be surprised – it’s not as though this town has ever been any good at racial integration or respect for anyone who isn’t a White Southern Baptist anyway.”

“Wow. Christians can be such hypocrites. It makes me so mad because I am Christian and it’s people like Ms. Owens that give Christianity a bad name. Who are you to judge anyone?! Leave them alone and stop criticizing everyone that is different from you! I thought Jesus loved everyone? So aggravating how people can be so stupid….makes me want to throw up!”

“Muslims want to be left alone to practice their religion, but if you are Agnostic, Buddhist, Hindu, Jewish, Atheist or Christian they want to kill you. If I had property out there, I would build the largest, smelliest, nastiest hog farrowing barn in East Texas, right on the property line.”

“I’m disgusted, but I can’t really say I’m surprised. The level of hate that it spewed by white conservatives in the South about Muslims has reached a racist level not seen since the Jim Crow days. It’s a simple issue of tolerance and understanding. If you don’t open your mind to understand that most Muslims are not dangerous radicals, you’ll never trust them, and that is very un-Christian, in my opinion. As a Christian, it embarrasses me to see the people quoted in this story and people in these comments speaking ill of good Muslims. These people are peace-loving people who pray to the same God that we Christians and Jews do.”

“The Quran contains at least 109 verses that call Muslims to war with nonbelievers. Some are quite graphic, with commands to chop off heads and fingers and kill infidels wherever they may be hiding. Muslims who do not join the fight are called ‘hypocrites’ and warned that Allah will send them to Hell if they do not join the slaughter…. Muhammad’s own martial legacy and the remarkable stress on violence found in the Quran have resulted in a trail of blood and tears across world history.”

“I am amused by those that try to insert race in the equation. Islam is not a race. It is simply a false religion, based on a pack of lies, in a book that was written by a false prophet. If Muhammad were alive today, he would be a registered sex offender. His favorite wife was an 8 year old, Aisha.”

“I believe that this is more of a safety issue to many of the people living on this street. Amy Street is a narrow, dead end residential street with many children living there. I know that I am concerned because I have a two year old grandson living on that street and this street is NOT built for any additional traffic. I don’t believe this is the proper place for a Mosque, a church, or anything else that would bring more traffic! Before I am accused to being a racist, I would like to add that I lived next door to a Muslim family for several years. I found them to be very nice and very good neighbors.”

“I would agree that having a place of worship in a residential neighborhood, on a dead end street, presents legitimate concerns to be addressed that have nothing to do with religion or culture. However, the quotes from Ms. Owens, along with the very aggressive tactic of distributing the Jesus signs throughout the neighborhood, overshadows these legitimate concerns, and now those concerns are irrelevant (at least in the context of this story). The story has shifted.”

“I believe this would be a non issue story IF it weren’t for 9/11. You know, the murdering of 3,000 +/- a few. Yes murdered by Muslims. Muslims that were doing exactly what the Quran teaches them to do. Kill the infidels. If a Muslim tells you he’s a peaceful Muslim, he’s either a liar or a backslid Muslim. There is no room for peaceful when it comes to the Muslim religion.”

“Christian Crusaders killed non-believers so the few Muslims who killed Americans in 2001 are not representative of the totality of the religion. There are already church structures in the city on dead end streets in residential areas. This would be no different.”

“Finally, some controversy has hit Longview. A peaceful group from the Muslim faith has decided to built a church to show this community that not all Muslims are extremist… just like not all Christians are extremists. I think it is wonderful that the community is becoming more diverse.”

“There are churches on residential streets all over Longview, but this is the only one that ‘Christians’ are complaining about. Hmm?”

“I do NOT want a Muslim place of worship in Longview or anywhere else….they hate everyone but themselves and want us all dead. What about that do you people not understand? If anyone spews hate….it is the MUSLIMS.”