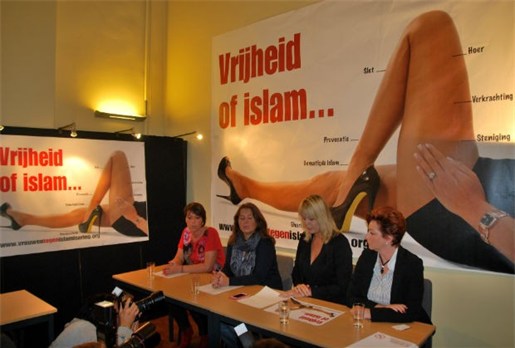 Belgian anti-Islam campaigners must remove all posters featuring the stilettos of the luxury French footwear designer Christian Louboutin after a court ruled in the company’s favour on Monday.

The poster promoted by the campaign group “women against Islamisation” showed the legs of Anke Vandermeersch, a former Miss Belgium and now a senator for the far-right Vlaams Belang (Flemish Interest) party.

Beside the image of her wearing the shoes, a key showed what it claimed was Islam’s view of a woman, as measured by the length of her skirt, from “sharia compatible” at floor level to “whore” just above the knee and “stoning” at the top of the thigh.

Louboutin said it had not authorised the use of its shoes in the campaign and that their inclusion damaged the company’s image. The group must remove all its posters within 24 hours, the court in Antwerp ruled.

Vlaams Belang’s parliamentary leader, Filip Dewinter, promptly tweeted a revised poster showing the same woman lying down, with seemingly identical shoes, except now with yellow soles rather than Louboutin’s famous red. Yellow is the colour of Dutch-speaking Flanders, which Vlaams Belang wants to split from Belgium.

Vlaams Belang has lost support since winning the votes of a third of the electorate in Antwerp in municipal elections in 2006, partly due to the subsequent rise of the separatist but not xenophobic N-VA (New Flemish Alliance) party.

In polls released on Friday, Vlaams Belang was backed by around 10% of Flemish voters.