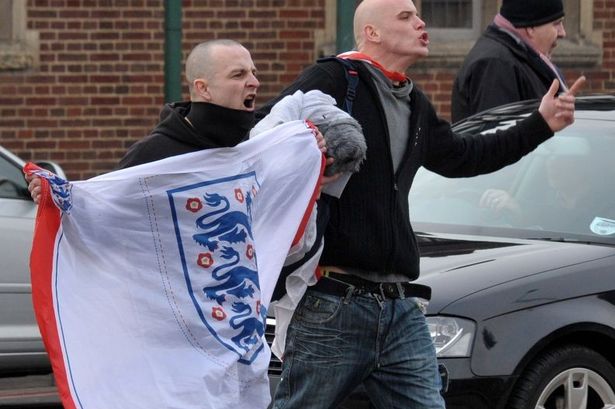 Shoppers at the Touchwood Centre in Solihull looked on in horror this afternoon (Saturday) as the EDL far right extremists waved flags and shouted anti-Islamist chants as they passed by.

Pav Sehra, 22, from Solihull, saw the commotion as she left the main shopping area and saw the protesters at Brueton Gardens, on Warwick Road at around 1pm. She said: “I think it is ridiculous. They shouldn’t be allowed to do it in public.”

The demonstration was organised by Matthew Pile, who runs the EDL Birmingham Division’s blog and is based in Sutton Coldfield. Members came from as far as south east London to take part.

Right wing extremists from the British National Party said they did not want to be associated with the event.

BNP member Ian Stock, from Sheldon, called the Sunday Mercuryto distance himself from the rally. He said: “They have just sent me a text message saying they are holding an demonstration against Islamification in the West Midlands. We do not agree with anything they are doing today. I saw what they did in Dudley.”

Mr Stock was referring to violent scenes in Dudley as the EDL protested against the opening of a mosque there in April 2010. Several people were injured when bricks and metal security fences were launched at riot police and 21 arrests were made.

* Matthew Pile has been charged with attacking a man on the bus in the city centre.