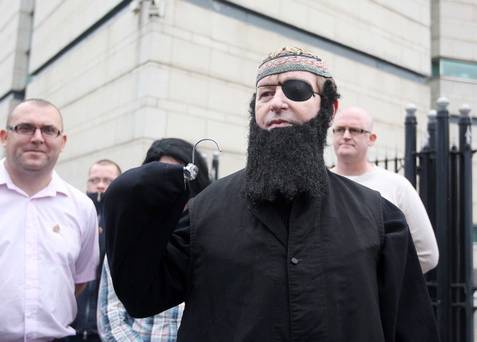 Protestant Coalition co-founder Willie Frazer appeared at court in Belfast yesterday dressed up as Abu Hamza. You might think that he was trying to draw a parallel between himself and another extremist who has incited hatred on the basis of a warped interpretation of his religious beliefs.

But no. Frazer has been charged under the Serious Crime Act 2007 with encouraging the commission of criminal offences in a speech he made in January during the Belfast flag protests, and he was protesting against a Loyalist militant being prosecuted on the basis a piece of legislation that he claims was meant to be used only against Muslims.

In a video statement filmed outside the court, Frazer said: “This law was brought in to deal with extreme creatures of hate, Muslim creatures who look to behead British soldiers, and I get charged with it.”

In reality Frazer is facing a number of further charges. He is also accused of taking part in an un-notified public procession, obstructing traffic in a public place, and possession of a prohibited weapon, namely a Taser stun-gun. Perhaps Frazer thinks those offences too are only supposed to apply to Muslims.