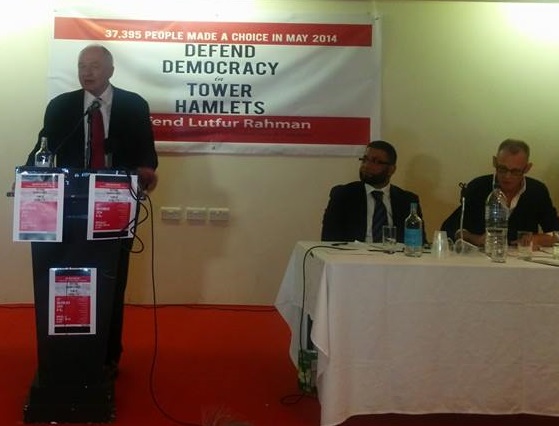 Ken Livingstone was accused by the government yesterday of inciting a lynch mob after he urged protesters to go to public servants’ homes and “make their lives intolerable”.

The Labour party was urged to expel the former London mayor for an incendiary speech in Tower Hamlets.

Mr Livingstone was speaking at a rally for the borough’s independent mayor Lutfur Rahman, whose victory in May’s local elections is being challenged in the High Court amid claims that electors were pressured into voting for him.

Eric Pickles, the communities and local government Secretary, has threatened to send commissioners to run the failing borough in London’s East End.

Mr Livingstone told a public meeting in Mile End on Wednesday: “When these commissioners turn up, find out where they live and then have a peaceful demonstration outside their homes so their neighbours know these are the kind of people who overturn a democratically elected mayor. Make their lives intolerable.”

Kris Hopkins, the local government minister, said: “I am appalled at Ken Livingstone’s comments which run the risk of stirring up a lynch mob mentality in Tower Hamlets. The borough is already riven by the politics of intimidation and division, and stupid remarks like his will only worsen tensions.”

Jim Fitzpatrick, Labour MP for Poplar and Limehouse, said after hearing Mr Livingstone’s comments: “That’s deeply disturbing. It’s almost inciting people to the level of intimidation. The Labour front bench welcomed the statement from Eric Pickles and have accepted the need for commissioners to be sent in to Tower Hamlets, so Ken is clearly not speaking for Labour party policy.”

The rally was in support of Mr Rahman, whose 3,000-vote victory over Labour is being challenged on the ground that voters were intimidated.

Campaigners behind the election petition claim their witnesses have been threatened. Mr Rahman has rejected such claims and urged anyone feeling intimidated to go to the police.

Mr Rahman said last night: “The speeches should not be taken out of context of passionately defending local democracy against the interference of Whitehall.”

Andy Erlam, one of the voters bringing the High Court petition, said: “Livingstone’s opportunist, inflammatory remarks are grossly irresponsible. They amount to an incitement to intimidate. Democracy really is under threat in Tower Hamlets.”

James Bloodworth, editor of the Left Foot Forward blog, said: “It’s disgraceful. They should definitely consider throwing him out of the Labour Party.”

Labour said: “Ken Livingstone’s views do not represent the views of the Labour Party and any act of intimidation would be entirely wrong. Tower Hamlets council must now work with the commissioners to ensure that what has gone wrong is put right.”