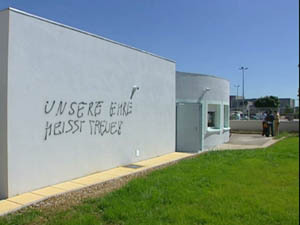 Nazi graffiti was painted on a hall in Meyzieu, a suburb of Lyon, and a fire started in the toilets Thursday.

The hall of 300 sqm, purchased and renovated by the local Muslim association, was to be inaugurated shortly and operation for the coming Ramadan.

Written in German, the inscription was the motto of the SS “Loyalty is our honor” and was written on the facade of the building, according to the local mayor, Michel Forissier.

Moreover, at the rear of the building a window was broken and a plastic bag filled with papers was thrown in, sprayed with inflammable liquids to set the fire. The fire did not spread and the firefighters didn’t need to intervene, according to Forissier, but the smoke caused damage, notably to the toilet area.

The inauguration of the hall shouldn’t be called into question. The mayor advanced a theory of an ‘isolated’ incident since there was no opposition to the project in the municipality, which has always accommodated all religions.