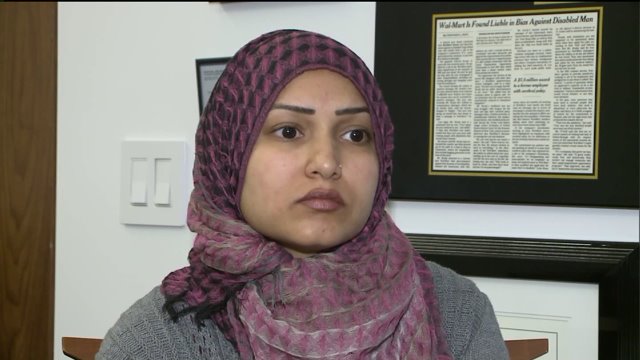 Juweria Khalid said she was a frequent Macy’s shopper, never missed their popular one day sales and this past October was no different, but little did she know how that day would change her life.

Khalid said after she already purchased a bracelet from the jewelry department, she spotted some earrings she also liked. Since she was already headed to the children’s department to shop for her two-year-old and 10-month-old, Khalid decided to pay for all of her items together on the 7th floor.

With her arms were full of bags from previous purchases, Khalid said she placed the earrings in her purse, fully intending she insists, to pay for her items. That’s when she was stopped by Macy’s loss prevention guards.

“I took out the jewelry and said to them I’m not stealing it. I’m going to buy it on the 7th floor. They never listened to me,” said Khalid.

Khalid was taken to the now infamous detention area of Macy’s, which she described to us as nothing short of a jail with bars. The Muslim woman, who wears a hijab, a Muslim head scarf, was forced to remove it. “They kept me locked there for hours. They never allowed me to take calls. My husband kept on calling like nine times,” explained Khalid.

Despite insisting she would pay for her items, which her attorney said added up to less than $100, Khalid said she was forced to pay a $500 fine with her Macy’s credit card. The NYPD was called, then Khalid charged with petit larceny and criminal possession of stolen property.

Khalid has now been vindicated, a judge dismissed her case for insufficient evidence. But it appears the damage has already been done. Khalid was eight weeks pregnant at the time of the ordeal. She lost her baby just days after. Khalid and her doctors believe because of the stress she suffered.

This latest case, according to Doug Wigdor of Wigdor, LLC., who is heading up a larger federal civil case with now more than a dozen plaintiffs, only illustrates further Macy’s consistent targeting of innocent customers. Wigdor said Macy’s and other department stores desperately need to revamp their loss prevention program.

“They’re preying on the most innocent people on our society. People of color, often people from out of the country, often people who don’t speak English or speak English well. There’s a big problem at Macy’s with who they stop, why they stop them and the cover up after the fact to justify the stop,” said Wigdor.

“Macy’s policies strictly prohibit any form of profiling and we have zero tolerance for discrimination of any kind,” the retailer said to PIX11 News in a statement Wednesday evening.