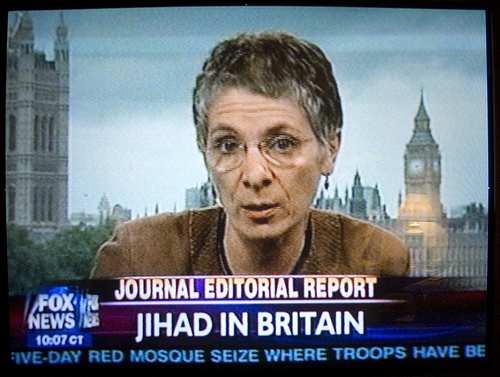 The Guardian reports that Melanie Phillips is outraged at the post by Sunny Hundal at Liberal Conspiracy which noted that her writings were cited by the Norwegian terrorist Anders Behring Breivik in his now notorious 2083 manifesto. “There are only two references to me or my work in its 1500 pages”, an indignant Phillips complains.

In reality, an entire article by Phillips is reproduced by Breivik. It takes up nearly three pages of his document. Now, bearing in mind that Breivik justified his massacre of young Labour Party members on the grounds that their party’s immigration policies and support for multiculturalism had opened the door to the “Islamisation” of Norway, what do you suppose was the subject of the article by Phillips that so impressed Breivik?

Well, it was from the 28 October 2009 edition of the Daily Mail and was entitled “The outrageous truth slips out: Labour cynically plotted to transform the entire make-up of Britain without telling us”. Phillips ranted that the then Labour government had pursued “a deliberate policy of mass immigration” which “amounted to nothing less than an attempt to change the very make-up of this country”. Labour had “engaged upon a deliberate and secret policy of national cultural sabotage”.

It was therefore a politically motivated attempt by ministers to transform the fundamental make-up and identity of this country. It was done to destroy the right of the British people to live in a society defined by a common history, religion, law, language and traditions. It was done to destroy for ever what it means to be culturally British and to put another “multicultural” identity in its place.

Labour’s aim, in short, was to “destroy Britain’s identity and transform it into a multicultural society where British attributes would have no greater status than any other country’s”. The government had “secretly plotted to flood the country with immigrants to change its very character and identity”. Phillips characterised this as “an act of unalloyed treachery to the entire nation”.

You can understand why Breivik was so keen on Phillips’s article, can’t you? It fed directly into the paranoid fantasies of the “counter-jihad” movement, of which Breivik is a part, that social democratic governments have engaged in a conspiracy to destroy their countries’ national identity through a programme of mass immigration and support for multiculturalism.

But Phillips denies any responsibility. She demands: “Is Hundal suggesting that my writing provoked the mass murder of some 93 Norwegians? Doubtless with one eye on the law of libel, he piously avers: ‘There is no suggestion that his actions were inspired by Melanie Phillips, nor am I making that claim’.”

Personally, I think Sunny was being far too soft on Phillips. Certainly there is no suggestion that Phillips advocates political violence and the killing of innocent people (except in the case of Israeli state terrorism, of course). But Phillips has certainly made a far from negligible contribution to whipping up the atmosphere of fear and hatred towards migrants and Muslims that provided the conditions for the atrocities in Norway.

You can imagine how different Phillips’s attitude would be if an antisemitic journalist had written endless pieces about the supposed Jewish threat to national identity and had accused European governments of conspiring to allow Jews to take over their countries, while nevertheless stopping short of proposing a violent response to this.

If a terrorist inspired by such views had reacted by killing those he held responsible for the “Judaification” of the nation, would Phillips assert that it was unfair to blame the journalist for the violence? Of course she wouldn’t. She would say, quite rightly, that “non-violent” antisemitic propaganda had helped to provoke the murders.

But Phillips asks us to believe that her own hate-filled tirades about migrants and Muslims are entirely without consequences.