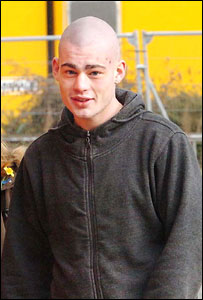 A woman felt “violated” when a man pulled off her religious headscarf – hijab – as she walked along a north Wales street pushing a pushchair.

Mold Crown Court heard that Damien French, 21, of Rhyl, had a previous conviction for animal cruelty when he fed a live zoo rabbit to an alligator. French admitted racially aggravated common assault and a racially aggravated public order offence. Adjourning sentence, the judge warned French he could still face prison.

The court heard that Shahenna Hussain, 23, had been walking with her sister and two nieces, pushing pushchairs along the street at the junction of Rhyl’s High Street and Wellington Road in April.

A witness in a shop saw French hurling abuse at a coach which appeared to be full of Asian passengers. When Miss Hussain saw him she put her head down to avoid eye contact. French and his group noticed her as she crossed the road and shouted and swore at her.

Gareth Parry, prosecuting, said: “She suddenly felt a violent grip to the top of her head, connecting with her hijab, which was fixed with two pins. But the pins were forced open.” He added: “She was particularly upset that the hijab was pulled off. She wears it to identify herself as a Muslim and in respect to her religion.”

Two police community support officers had seen what happened and French was arrested. When interviewed, he denied he had done anything improper. French initially pleaded not guilty but changed his plea in the magistrates’ court.