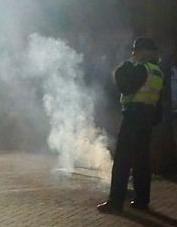 A man has been arrested after a Koran was allegedly burned during an anti-Islamic rant, police have said.

He was reported to have stood on a street in Carlisle city centre on Wednesday making pronouncements against the Muslim religion in front of a large crowd. The man is then alleged to have set fire to the Koran he was holding before discarding it on the floor and hurrying away. Officers arrived at the scene a short time later and are now investigating.

A spokesman for Cumbria Constabulary confirmed that a 32-year-old man has been arrested. He added: “Just after midday on Wednesday, police received reports that a Koran was being burned by a man in Carlisle city centre. Police have seized the remains of the book and a 32-year-old male has been arrested on suspicion of using racially aggravated threatening words or behaviour. The man remains in police custody where he is helping officers with their inquiries.”