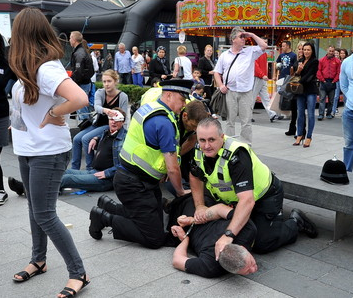 Eye-witnesses have told how they watched in horror as a supporter of the English Defence League attacked a man promoting multiculturalism during a march through Hull city centre.

Shoppers and families enjoying a Saturday afternoon in the city centre watched helplessly as the EDL supporter broke free from police ranks to attack the man outside St Stephen’s shopping centre in Ferensway.

The EDL marcher had to be dragged off the man, who had blood pouring from his head and his face, while children were playing on a funfair ride just yards away. He was wrestled to the ground by police while shoppers and passers by rushed to the aid of the injured man before he was led away in handcuffs, screaming abuse.

The victim has been taken to Hull Royal Infirmary for treatment to his injuries. His condition is not thought to be serious.

A friend of the man who was attacked, who asked not to be identified, said: “We had banners saying we were proud to be part of a multicultural Hull. One broke free from the ranks and started battering him, took him to the ground, dragging him all over the place. We came out to say that the vast majority of Hull people don’t agree with any of this and we want to live peacefully together.”

Humberside Police have confirmed a 45-year-old man has been arrested in connection with the attack.

The attack happened just minutes after around 300 EDL supporters set off on a protest march through Hull, walking along Ferensway before turning into Spring Bank.

Humberside Police had refused to allow the march along the full-length of Spring Bank where many of the city’s refugees and asylum seekers live alongside Hull’s Eastern European community. Marchers were forced to turn down Park Street before heading along Anlaby Road and onto Queen Victoria Square for speeches from protest organisers at the end of the demonstration.