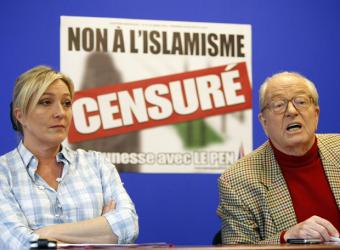 A first. On Thursday Marine Le Pen will be invited onto Radio J, the Jewish community station, which would never invite Jean-Marie Le Pen, her father and predecessor in the presidency of the Front National, because of his antisemitic remarks.

For 40 minutes this Thursday the president of the FN will for the first time be the political guest on the Radio J Forum which is broadcast every week early in the afternoon. “I think what she said about the Shoah challenges the whole legacy of Holocaust denial by the Front National and her father,” Frédéric Haziza, head of policy at the station, explained.

Marine Le Pen said early in February in The Point that what “occurred” in the Nazi camps “is the epitome of barbarism”. “Marine Le Pen is not Jean-Marie Le Pen, for whom the gas chambers are a detail of history”, said Haziza, recalling the words of the former president of the FN.

Clearly this represents a major advance in Marine Le Pen’s campaign to “de-demonise” the FN. Jean-Yves Camus, an expert on the far right, has condemned Radio J’s decision as “total communal irresponsibility”, motivated by the urge to boost ratings. He adds that the breakthrough for Marine Le Pen is the acceptability of her language on “immigration and Islam” among a section of the Jewish community.