Marine Le Pen, the National Front candidate for the French presidential election, accused rival President Nicolas Sarkozy of having sent “a simple message” when some Islamists were arrested on French territory, after French forces assaulted Mohamed Merah’s house last month. Le Pen was speaking at a press conference with foreign journalists in her campaign headquarters at Nanterre, west of Paris.

Responding to a question from The Jerusalem Post, following the surprising absence of mentions in electoral debates of the shootings in the southern French town of Toulouse, Le Pen criticized Sarkozy, calling his crackdown on Islamists “merely electoral agitation after the Merah affair.”

“A few arrested Islamists and that is all… [Sarkozy] is not dealing with the real problem of fundamentalism, although he has been in charge of national security for the past 10 years.” For Le Pen, Sarkozy, like his predecessors, “deliberately downplayed the threat from Islamists who want to see France as we know it disappear in favor of Shari’a.”

Going further, she accused her main rival for the voice of the right wing to have even “opened the door to the UOIF who called for the murder of Jews”. “He provided the first steps to the ladder for the fundamentalists in France and internationally,” she said. 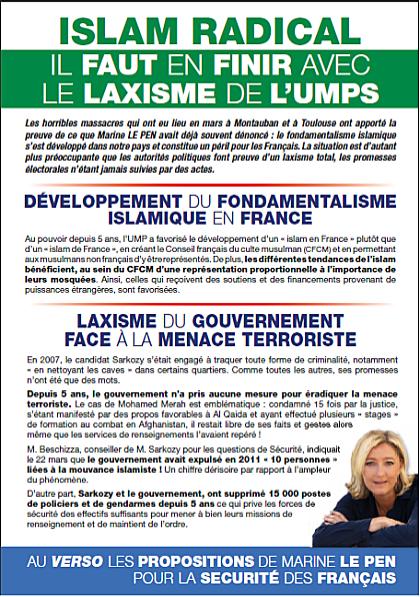