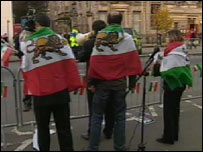 About a dozen protesters gathered outside Younger Hall, where the university principal, Brian Lang, presented the former president with his degree.

Among the protesters was Maryam Namazie, of the Iranian Women’s Liberation group, who fled the country in 1980. “It is disgusting that St Andrews University is conferring an honour on this man, he is responsible for more than 1,300 deaths during his presidency,” she said.

The university defended its decision to invite Mr Khatami, citing his moderate views and willingness to talk with the west as reason to engage with him. The students’ association backed that decision.

“What we can offer is acknowledgment of a courageous stand against insularity and congratulations on real and persistent efforts to reach out and engage with nations of the west,” said history professor Michael Bentley, speaking after the former president received his honorary degree.