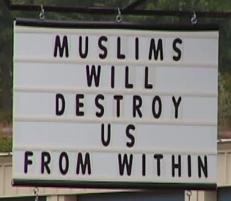 Russell G. Baker says he’s just speaking his mind when it comes to the controversial messages about the president and Muslims that he posts outside his Route 20 business, Baker’s Auto Body and Self-Storage.

But a recent sign – “Muslims will destroy us from within” – has sparked anger from some Muslims who say Baker is spreading hate and “Islamophobia.”

Baker, an intense 60-year-old man who can barely stand to utter the president’s name, takes offense that he’s been called a bigot, racist and other negative words by critics.

He said he started posting messages on the sign before President Barack H. Obama took office. “I did a little research through his background and I wasn’t a happy camper. In a nutshell, number one, he’s not who he claims to be and number two, he’s a Muslim,” Baker said.

But let’s be fair to Baker. After complaints, he replaced the “Muslims will destroy us from within” sign with another reading “We’re on the eve of destruction”. On the other side, it says “Mosque at Ground Zero 73% say no! I’m 1.”