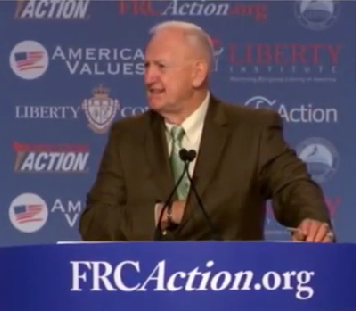 The mayor of Vancouver, Wash., is boycotting a prayer breakfast speech by a retired U.S. Army General who has called Islam a “totalitarian way of life,” called for a ban on mosques in American and said that Muslims should not enjoy free speech protection under the First Amendment to the U.S. Constitution.

Retired Lt. Gen. William G. “Jerry” Boykin, a regular on the conservative speaking circuit, is slated to keynote Friday’s Clark County Mayors’ and Civic Leaders’ Prayer Breakfast. The selection of Boykin has shrouded in civic controversy what is normally a solemn and unifying civic event that draws more than 900 people.

Vancouver Mayor Tim Leavitt, while appreciating Boykin’s 36-year military career, said the general’s views are at cross-purposes with the purpose of the breakfast.

“The vision of the breakfast is ‘inspiring Clark County residents to honor, encourage and support each other,’” Leavitt said in a statement. “But it is apparent to me that the values of the keynote speaker are not consistent with the original vision of the event. In fact, I’m certain that Lt. General Boykin’s position on a number of social, political and religious issues does not at all reflect the values of acceptance, tolerance and compassion our community strives for.”

Boykin began to make news after the Sept. 11, 2001, terrorist attacks on the United States. He characterized the war on terrorism as a Christian war with Satan the enemy. The stand was quickly repudiated by President George W. Bush.

In retirement, Boykin has been more outspoken. Islam is “a totalitarian way of life,” he has stated, its followers “under an obligation to destroy our Constitution.” Therefore, in Boykin’s words, “It should not be protected under the First Amendment.”

Boykin has warned that God will deliver upon America a Civil War-like reckoning because of abortion and pornography. At a recent conference, he stated: “Americans need to have more babies and populate this country with red-blooded patriotic Americans” to counter Muslim influence.

The general has charged that President Obama’s “identity is more with Islam” than it is with Christianity. Boykin recently said Obama “thinks more like a community organizer than a commander in chief.”

Since The Columbian newspaper began quoting from Boykin’s greatest hits, the prayer breakfast has seen dropouts.

The Clark County Family YMCA, one of the event’s sponsors, lamented in a statement that the breakfast is supposed to be “an uplifting event” in which Christ is called on to bless the community’s leaders. “Originally we had asked our keynote to speak based on his Christian testimony,” it added. “In recent days statements made by the speaker have come to our attention that detract from the purposes and mission of the prayer breakfast.”

Leavitt indicated that would-be attendees should consider eating elsewhere. “I encourage others, including the event sponsors, to carefully consider their attendance and support,” said the Mayor. Leavitt said he was “stunned” that organizers did not rescind the invite to Boykin “when given the option to correct a poor decision.”

The Washington chapter of the Council for American-Islamic Relations, as well as the Islamic Society of Southwest Washington, sent Leavitt a letter decrying Boykin’s “outlandishly inaccurate and inflammatory statements” and noted that Boykin withdrew in 2012 from the U.S. Military Academy’s National Prayer Breakfast.

Event organizers have refused to speak to the Columbian. They have said in a statement that Boykin’s keynote will be “focused on his personal faith while serving his country.”

Boykin is now executive vice president of the Family Research Council, a Colorado-based group best known for its opposition to non-discrimination and marriage equality legislation for gays and lesbians.

Boykin has also spoken warmly of efforts to bring Jews to Christ.

“Inside the ballroom, visitor Michael TerBush of the Full Gospel Men’s group of Tualatin, Ore. told The Columbian that ‘Muslims should be exterminated. It’s a demonic theocracy, not a religion.’ Its holy book, the Koran, is full of archaic, barbaric punishments and practices, he said. Could you find those same sorts of admonitions in the Bible? Yes – ‘but the God of the Bible is the real God,’ TerBush said.”