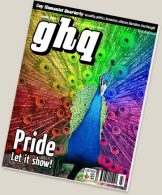 The new Gay Humanist Quarterly is just out. It includes a characteristically hysterical rant by Maryam Namazie of the Worker Communist Party of Iran, delivered at the International Day Against Homophobia in London in May. Namazie told her audience:

“We mustn’t accept any excuses or apologies for the Islamic regime in Iran and its like – whether in Saudi Arabia or right here in the UK. They all belong to the same movement and want the same thing.”

She continued, not entirely coherently:

“The only difference is that the Manchester Imam who has said that the execution of sexually active gay men is justified or the Muslim Council of Britain’s claims that it is ‘unacceptable’ or ‘sinful’ is that for now they cannot mete out their Islamic justice with hangings in Trafalgar Square. This vile movement needs to know that we are watching them, holding them responsible and won’t let them do it whenever they try.”

If anything is guaranteed to discredit IDAHO, it’s having a lunatic like Namazie as one of the featured speakers. Amnesty International and Westminster Council, and the other organisations who co-sponsored the event, should really show more responsibility than to invite a speaker who thinks the way to oppose prejudice against the LGBT community is to promote bigotry against the Muslim community. It’s hard to imagine that Amnesty would be happy if they organised an event to combat Islamophobia and one of the platform speakers took the opportunity to indulge in an ignorant display of homophobia.