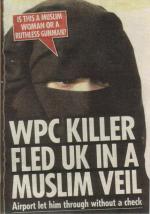 “The sharp differences in how the papers reacted to the verdict in the trial of the killers of policewoman Sharon Beshinivsky this week exposed the media’s vicious racism and Islamophobia. After all, it’s tough being a newspaper editor. Should we use page 1 to bash the Muslims, or the asylum seekers? Decisions, decisions…”

Media Workers Against the War examine press coverage of the baseless story about a suspected murderer fleeing the country disguised as a Muslim woman in a veil.

They conclude: “The truth is that the Times, Express, Sun and Guardian seized on the flimsiest of hints of a story in order to fill their pages with anti-Muslim bile.”