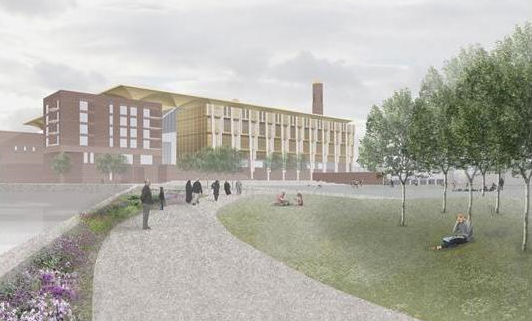 A public inquiry into Newham Council’s rejection of plans for a mosque in West Ham has opened with supporters and opponents of the so-called “Mega Mosque” making their case.

The Abbey Mills Riverine Centre application for a 29,227sq m mosque in Canning Road was turned down by councillors in 2012 unanimously after local residents protested against plans.

But this prompted counter protests by local Muslims in favour of the new centre, which would cater for 9,000 worshipers in a site more than three times the floorspace of St Paul’s Cathedral.

A public inquiry held by the government’s Planning Inspectorate kicked off on Tuesday 3 at the ExCeL centre, and is expected to last until June 23.

The inquiry is also looking at the temporary permission granted for the site to be used as a smaller mosque for two years, which has now expired.

Representations will be made by the Newham People’s Alliance, a community group which supports the plans, and the MegaMosqueNoThanks campaign, run by ex-Newham councillor and former head of the Christian People’s Alliance, Alan Craig.

The final decision on the future of the plans, put forward by the Anjuman-E-Islahul-Muslimeen Trust, will be made by local government secretary Eric Pickles after he hears the Planning Inspectorate’s recommendations.

The rejected development included a segregated space for nearly 2,000 women, a library, dining hall, visitors’ centre, and eight flats for imams and guests, along with tennis courts, football pitches, a garden, and a riverside walk along Abbey Creek.

A spokeswoman for Newham Council said: “This is an ongoing public enquiry so we can’t comment on this.”