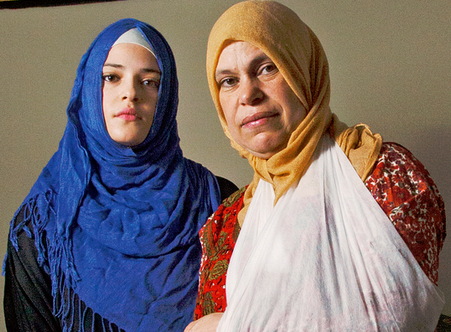 A Muslim woman is nursing a broken arm after being pushed onto a road in an unprovoked racist attack in Melbourne’s north.

The attack occurred outside a Lalor shopping centre in the middle of a weekday earlier this month. The 48-year-old woman, who was wearing a hijab and a “long Islamic dress”, had been shopping at Lalor Plaza and was on her way home when she was attacked. The woman’s daughter, Abrar Ahmed, saw the incident unfold from her car.

“A man approached my mum and said, ‘You Muslims, go back to where you came from’,” Ms Ahmed said. “As my mum turned around to see who was yelling at her in such a disgusting way, she saw this really big guy. He pushed her on the ground, she landed in the middle of the road. When she fell on the ground she broke her arm. She heard her bone crack.”

Ms Ahmed, who organised a recent protest against racism in the CBD, said attacks like the one on her mother were not uncommon. “A lot of other Muslim women, they have been going through worse assaults, they are being attacked in very different ways and they don’t have the courage to speak out.”

In Carlton, Quman Ali was pushed down the steps of a tram earlier this month, falling into the metal barricade on the street.

She said the incident occurred about 6.30pm on a weeknight on a packed No. 1 tram travelling to East Coburg. As she tried to exit the tram, a man whom she was passing pushed her down the stairs. “He pushed me out of the tram. When I looked up he was mumbling something. I was so shocked, I could not even say anything.”

Ms Ali hit the metal tram barrier, injuring her knee. She believes the attack was racially motivated because she was wearing a hijab.

Neither woman reported the attacks to the police.

Federal member for Melbourne Adam Bandt said the current political climate is contributing to an increase of attacks on Muslim women. “It can divide our community and some people end up on the receiving end of abuse. In this case, Muslim Australians – and especially women – tell me they are being harassed and assaulted,” he said.

Brunswick police Acting Senior Sergeant Ben Davies said police take all reports of racist attacks seriously. “I think sometimes people have a fear of reporting or think there is no point in reporting, so we are engaging with the community to encourage them.”