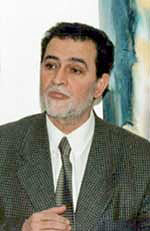 “In an August 29, 2005 article in the London Arabic-language daily Al-Quds Al-‘Arabi, titled ‘The London Bombing: Harm Is Brought Upon the Muslims Only by Their Own’, British Islamist Dr. ‘Azzam Al-Tamimi argues that Muslim critics are Islam’s worst enemies….

“Al-Tamimi is referring primarily to liberal Arab and Muslim writers who, following the London bombings, criticized the previous long-standing British policy of tolerance towards Islamist preachers of hatred and violence. He calls these liberal writers traitors….

“Al-Tamimi’s argument echoes a similar accusation by Sheikh Omar Bakri Muhammad, termed ‘the notorious fundamentalist’ by the London Arabic-language daily Al-Sharq Al-Awsat. Following the London bombings, Bakri, the head of the Islamist Al-Muhajiroon movement in Britain, fled to a Lebanon hideout from his London base of activity of many years.”

In fact, even judging by MEMRI’s selected excerpts from the article, it is clear that Azzam Tamimi did not denounce the “treacherous Muslims’ alliance with liberal democracies”, to quote MEMRI’s own sub-heading. He condemns General Musharraf’s deportation of non-Pakistanis studying at madrassas, and he opposes British Muslims who have called for the deportation of those supporting liberation struggles in Palestine and Chechnya, for the suppression of the non-violent Hizb ut-Tahrir, and for the exclusion of prominent Muslim thinkers like Yusuf al-Qaradawi. He criticises Muslims who called on women to abandon the hijab, who misrepresent the character of Sufism and who collaborated with BBC’s Panorama programme in witch-hunting the MCB. Dr Tamimi argues that those who take such positions are assisting the enemies of Islam.

As for MEMRI’s assertion that Dr Tamimi’s arguments echo those of Omar Bakri, this is a laughable attempt to make an amalgam between a respected Islamic scholar and a politically marginal buffoon.