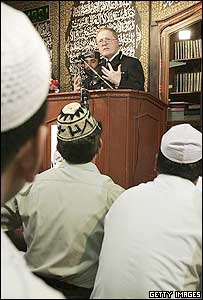 The attacks were not anything to do with Islam, he said, but were done in the name of Islam “and that puts the responsibility on all of us.”

“There’s nothing wrong with being a fundamentalist Muslim, Jew or Christian, the key issue is the slide into extremism,” he said.

He compared the “perversion of the virtues of Islam” behind the London “atrocities” to anti-abortionists in America who shoot doctors.

“For you I know this is the worst nightmare that can happen to the British Muslim community,” he said.