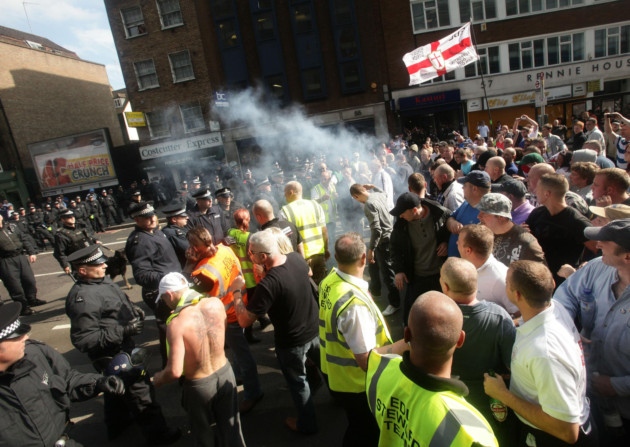 BBC News reports on the Metropolitan Police’s plan for the proposed English Defence League demonstration in Tower Hamlets this Saturday:

“The Met said it will allow the march to go ahead but only between 12:00-15:00 BST, and it must only take place on this route: Queen Elizabeth Street, Tower Bridge Road, Tower Bridge Approach, The Minories and then into Aldgate High Street. It must not to go beyond the junction with Mansell Street. The route prevents the EDL from entering the heart of Tower Hamlets, residential areas and religious premises.”

In any case, whatever their leadership may agree with the police, it’s hard to see the EDL rank and file being happy to stick to a route that effectively bans them from the “Islamic Republic” whose population they have come to intimidate.

If the march goes ahead on this basis, a violent confrontation between the EDL and the police at Aldgate High Street, or at some earlier stage of the route, looks a real possibility. The prospect of these thugs breaking through police lines and marauding through Tower Hamlets itself cannot be discounted.

The Met’s statement on the conditions they have imposed on the march and counter-protest can be consulted here.

Update 2:  EDL leader Stephen Lennon claims they are intending to mount a legal challenge to the Met’s restrictions on the march: