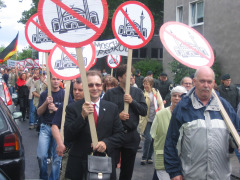 COLOGNE, Germany – Never mind that a local brothel claiming to be Europe’s largest calls itself the Pasha and sports an ersatz arabesque theme. Some residents of this ancient city on the banks of the Rhine see the brothel as a shining example of their tolerance. But what irks them is that some Muslims want to build a mosque, complete with a dome and minarets.

The residents complain that the minarets would clash with the towering spires of the city’s celebrated 13th-Century cathedral. But as the debate heats up, it has revealed a cultural schism that goes much deeper than any disagreement over architectural aesthetics.

Cardinal Joachim Meisner, spiritual leader of the city’s Catholics and a close friend of Pope Benedict XVI, has said that the proposed mosque leaves him with an “uneasy feeling.” Monsignor Rainer Fischer, another Catholic clergyman in the city, said: “The idea of building the mosque has brought up a number of issues that have always been there but were submerged. Now they are out in the open.”

“The mosque is not a symbol of integration, it’s a symbol of isolation, the symbol of an isolated enclave of Oriental culture,” said Joerg Uckermann, deputy mayor of the Ehrenfeld district and a member of Chancellor Angela Merkel’s Christian Democratic Union. “I think the minarets are a sign of sharia” – Islamic law – “and I do not want that here. This is a Christian city,” Uckermann said, openly expressing what many residents would say only in private.

The ferocity of the opposition has come as a shock to members of the Turkish community. It also angers them. “They are saying that this is a Christian nation, and there is no space for any other religion? This is against all the principles of freedom and democracy,” said Yildirim.