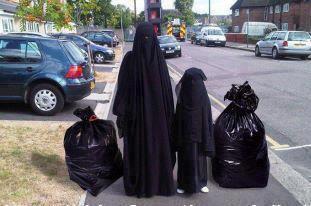 But she also used it recently to compare Muslim women and children clad in traditional Islamic garb to garbage bags.

Pugh shared the above photo on May 21 with the following commentary: “Disturbing … that women & little girls are OK with dressing like this!!! What will it take for these women to stand up and say, ‘NO’!? Wondering if they will ever do that?!”

The photo was originally uploaded by “Proud to be an Infidel,” a Muslim-bashing page with the following slogan: “It’s not Islamophobia when they are really trying to kill you.”