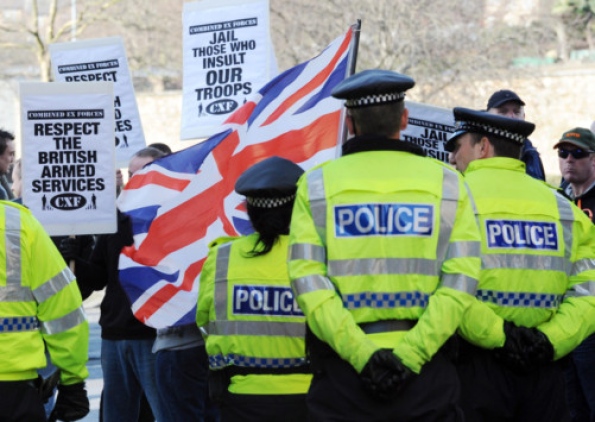 A Yorkshire teenager today denied posting a grossly offensive message on Facebook about the deaths of six British soldiers in Afghanistan.

Azhar Ahmed, 19, appeared at Dewsbury Magistrates’ Court charged under the Communications Act 2003 with sending a message that was grossly offensive on March 8.

A racially-aggravated public order charge was withdrawn at today’s hearing and Ahmed denied the new charge that was put to him.

Ahmed, of Fir Avenue, Ravensthorpe, West Yorkshire, was bailed and will stand trial at Huddersfield Magistrates’ Court on July 3. He has been bailed to an address not given to court.

There was a large police presence outside court as around 50 far-right protesters staged a noisy demonstration when the defendant arrived and left.

Although the English Defence League’s Yorkshire division promoted the demonstration, it is notable that the placards in the photo are those of Combined Ex Forces, a breakaway from the EDL.

At least the CPS had the sense to withdraw the absurd “racially aggravated” public order charge. Under Section 127(1) of the Communications Act 2003, it is an offence to send over a public electronic communications network a message that is “grossly offensive or of an indecent, obscene or menacing character”. The offence carries a possible 6-month prison sentence.

We’re still waiting for West Yorkshire Police to take action against those EDL supporters who posted death threats against Azhar Ahmed on Facebook. Are the EDL not subject to the Communications Act 2003 too? Or is it only Muslims who are prosecuted for posting Facebook messages that are “grossly offensive or of an indecent, obscene or menacing character”?