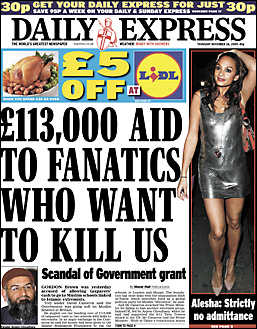 “After yet another stupid health scare story yesterday (too much salt is bad for you, shock), the Express was back to one of its other favourite topics today: Islam. Or should that be anti-Islam hysteria?

“There is so much wrong with the Express‘ article that it’s hard to know where to start. But let’s try this: the headline ‘£113,000 aid to fanatics who want to kill us’ no longer exists on the Express website. They have changed it to a much less inflammatory David Cameron: Brown soft on Muslim fanatics, which strongly suggests they have backed away from their own ridiculous front page.”

Tabloid Watch quotes the Express editorial, which is not available online. This states: “What these exchanges demonstrate is just how deeply in hock the Labour party is at every level to Muslim vested interests.” Under the heading “No funding for Christians”, the editorial quotes actor David Suchet as saying: “A charity I work for got turned down for Government funding recently because it was a Christian charity, even though it had been funded by the Government for several years.”

The Express comments: “It does not take a brilliant detective to work out what is going on here, just an ordinarily observant person: Britain’s cultural identity is being systematically dismantled by a government of traitors.” As Tabloid Watch notes, this directly echoes the language of the BNP.

The Express article reporting Suchet’s comments also quotes Alan Craig of the Christian Peoples Alliance as claiming: “Christianity is being marginalised by those who rule our society. Christianity can stand up for itself, but my concern is that it is not a level playing field. It seems everything is being done to accommodate the Islamic faith at the expense of society.”