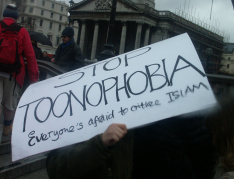 “Voltaire” – i.e. Peter Risdon of the “March for Free Expression” – has launched a new blog called Toonophobia. The definition it offers of the term is a parody of the 8-point Runnymede Trust definition of Islamophobia. Yes, positively Wildean in its wittiness, Peter.

Still, Peter has gained one new admirer, who writes: “Previously voltaire has stayed away from giving the impression that muslims are wrong in any way. Could this be the begginings of a tacit acceptance that people who follow a terrorist paedophile who openly raped the wives of his victims after beheading them, might not be the best bedfellows a country could ask for?”