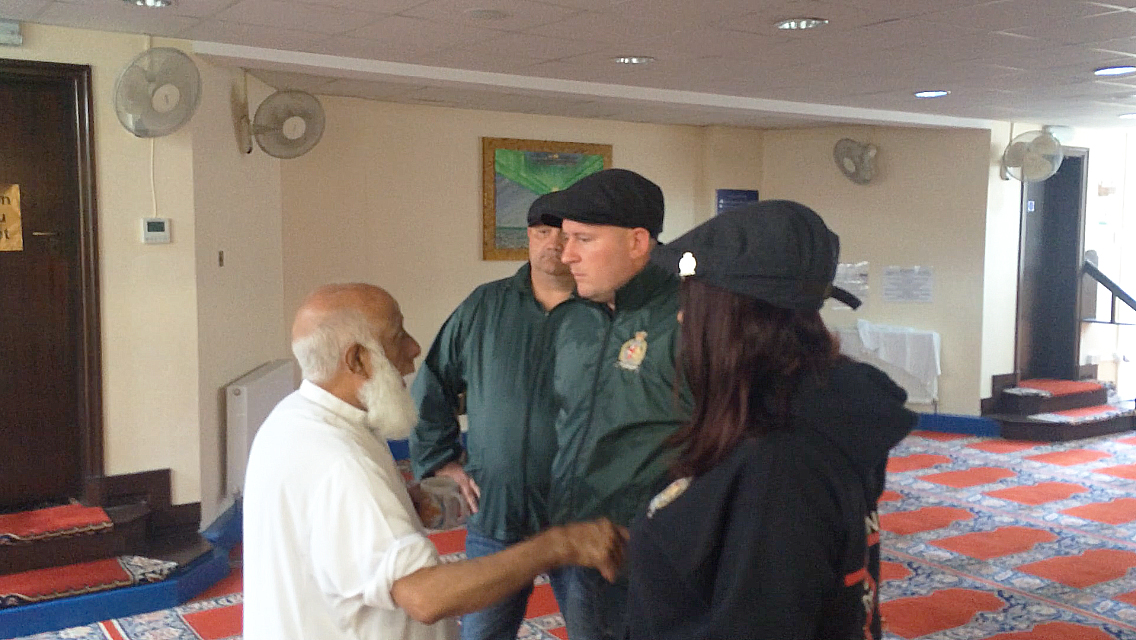 Under a headline proclaiming “Britain First Kent battalion activists invade Crayford mosque”, the fascist group Britain First is boasting that its paramilitary-clothed activists have engaged in yet another act of religious harassment, in this instance at North West Kent Muslim Association’s mosque in Crayford High Street.

The purpose of the ‘invasion’, according to Britain First, was to “to inform the Imams that they have exactly 7 days to remove sexist, segregationalist signs from outside their building, or we will”. The reference is to signs indicating the entrance to the women’s section of the mosque. Like most mosques, Orthodox Jewish synagogues and Sikh gurdwaras, the North West Kent Muslim Association conducts acts of worship on the basis of gender separation.

Needless to say, Britain First doesn’t have a problem with gender separation when Jews or Sikhs engage in it. But when Muslims follow this religious practice, Britain First leader Paul Golding thinks he’s entitled to subject them to threats.

This isn’t the first time that Golding has targeted the Crayford mosque. In March last year, accusing the North West Kent Muslim Association of “Islamic bigotry against women”, he launched a campaign together with fellow fascist Paul Pitt/Prodromou under the banner of the now moribund far-right unity group, the English National Resistance. Although a proposed demonstration outside the mosque was called off, Golding announced that Britain First would be continuing the campaign by other means.

It is clear that Britain First’s activity amounts to racially or religiously aggravated harassment, which is a criminal offence under Sections 31 and 32 of the Crime and Disorder Act 1998 (as amended by the Anti-terrorism, Crime and Security Act 2001). Racially or religiously aggravated harassment is no minor offence –  it carries a potential two-year prison sentence.

It should be noted that the harassment of Crayford mosque by Britain First involved a threat to remove the women’s entrance signs from outside the building. If Golding were to carry out that threat, he would be committing racially or religiously aggravated criminal damage, which is an offence under Section 30 of the Crime and Disorder Act and carries a potential 14-year prison sentence.

Hopefully Kent Police will be pursuing this matter and the Crown Prosecution Service will authorise charges against Golding.

The report quotes mosque volunteer Syed Alam as saying that five men and one woman from Britain First entered the mosque without removing their shoes and stayed for up to 10 minutes berating a handful of members who were there.

Mr Alam told News Shopper: “They are filthy people creating trouble in our society. They were quite lucky because if they had come before half past one there would have been lots of people finishing their prayers and there could have been real trouble.

“They were very aggressive and threatening. The signs are our religious policy. They are making trouble for nothing. We have been here since 1997 and we have good relations with local people.”