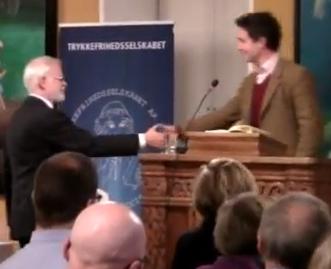 Douglas Murray has followed up his ludicrous blog post accusing Hope Not Hate of inciting the attempted murder of Danish Islamophobe Lars Hedegaard with a puff piece in the Spectator based on an interview with the great man.

“Lars was his usual calm, eloquent and forthright self”, an admiring Murray gushes. “If anybody thought they could silence him, they’ve got another thing coming.” (The admiration is obviously mutual – Hedegaard’s Dispatch International has just published an article entitled “Soft-spoken Douglas Murray – razor sharp under the velvet surface”.)

The tone of Murray’s article is set in the opening paragraph, where he quotes Hedegaard as stating that he was attacked by an individual “looking like a typical Muslim immigrant” – though quite how Hedegaard could recognise someone’s religious beliefs and country of origin from their appearance is unclear. Presumably he means that his assailant had brown or black skin. This was enough to identify him not only as a Muslim but also as an “immigrant” – a term that Hedegaard evidently applies to non-white inhabitants of Denmark, irrespective of their place of birth. While some us might think this provides an insight into the Danish Islamophobe’s bigoted mind-set, Murray doesn’t seem to find it objectionable in the least.

Murray tells us that “Hedegaard’s profile rose after the mainstream media’s capitulation in the wake of the Mohammed cartoons affair”. The “capitulation” consisted in a refusal to re-publish Islamophobic caricatures commissioned by the Danish newspaper Jyllands-Posten, some of which bore more than a passing resemblance to classic antisemitic propaganda. One of the worst of them was a cartoon of the Prophet Muhammad with a bomb as a turban, the purpose of which was to associate Muslims with violence by suggesting that Islam inspires terrorism. Murray boasts that when he addressed a meeting of Hedegaard’s so-called Free Press Society in Copenhagen in November 2011 he was pleased to receive a mug with that very same cartoon on the side – “a Mo mug”, in Hedegaard’s phrase. Perhaps someone should present Murray with a mug featuring a Der Stürmer caricature of a hook-nosed Jew counting money, so he can add it to his collection.

Murray describes Hedegaard’s Free Press Society as “an organisation which campaigns for the rights of journalists and cartoonists to express themselves without fear of murder”, whereas its actual role has been to defend the rights of Islamophobes to incite hatred against Muslims. Back in 2007, for example, the Free Press Society gave an award to Jyllands-Posten editor Flemming Rose in recognition of his decision to publish the notorious cartoons. Hedegaard made a speech in which he compared calls for Rose and his newspaper to apologise for abusing and offending the Muslim community to the voices advocating the appeasement of Nazi Germany on the eve of World War II.

The real role of Hedegaard’s organisation is also demonstrated by the fact that a leading figure in its global extension, the International Free Press Society, is one James Cohen, who was appointed head of the English Defence League’s Jewish Division only a couple of months before Murray addressed the meeting in Copenhagen. Of course, Murray has in the past expressed his sympathy with the EDL and its stand against the threat of sharia law, acclaiming it as “a grassroots response from non-Muslims to Islamism”, so he would hardly have a problem with the IFPS’s links to this gang of far-right street thugs.

Hedegaard’s own role in inciting hatred against Muslims led to criminal charges being laid against him in Denmark, which Murray summarises as follows: “Two years ago Hedegaard was put on trial for ‘hate-speech’. He was unanimously acquitted.” Hedegaard was in fact convicted of inciting hatred by the High Court and fined, only for the judgement to be overturned by the Supreme Court on appeal. Murray also omits to inform Spectator readers what it was Hedegaard said that led to his prosecution. Let us enlighten them.

In a video interview conducted by a sympathetic blogger, Asger Trier Engberg, which was posted on the Snaphanen website in December 2009 under the headline “Islam is an army”, Hedegaard stated:

When a Muslim man rapes a woman, it is his right to do so…. A loose woman, a woman who is not under the protection and the guidance of her guardian is basically free to be raped. If she moves around in the city without any guardian, you can freely rape her. She is your slave…. Sweden I think is probably the most prominent example of this in the West, where Swedish girls are raped. Gang-raped etc. etc. There is nothing wrong in it, viewed from an Islamic perspective. This is your right. You are even obliged to do that.

When Engberg commented that it was difficult to understand how Muslims could morally justify this, given that their daughters could be among the victims, Hedegaard replied: “But they rape their own children.” He continued:

You hear that all the time, that girls in Muslim families are raped by their uncles or their cousins or their father…. Women are basically, how can I describe it? They have no value. They are not human beings. They have a function as wombs. They bear the offspring of the warriors in order to create new warriors. Other than that – well, they can be used for sexual purposes, but they have no value. No human value.

Murray doesn’t tell us whether he agrees with Hedegaard’s views. However, the fact that he refers to this sickening anti-Muslim diatribe as “hate-speech” in ironic quotation marks indicates that Murray believes it to be a legitimate expression of opinion. Indeed, he wonders why “people keep trying to silence such defenders of free speech”.

Murray also fails to mention that Hedegaard was acquitted on a technicality, with the Supreme Court accepting the defence’s bizarre claim that Hedegaard participated in the Snaphanen interview with “no intention of disseminating his remarks to a wider audience”. (And if you believe that, you’ll believe anything.) Hedegaard himself was indignant that he should ever have been prosecuted in the first place. He denounced Article 266b of the Danish penal code under which he was charged as “a disgrace to any civilised society”, claiming that it represented “an open invitation to frivolous trials”. It’s worth noting that Article 266B was originally introduced in 1939 in order provide Denmark’s Jewish community with protection against hate-speech by far-right antisemites. Evidently Hedegaard thinks this was an outrageous attack on free speech. Again, it’s unclear what Murray’s position is.

Murray concludes by posing the question of whether the mainstream media played any part in encouraging the attack on the man he describes as a “mild-mannered scholar”. After all, the media have published “smears around the failed prosecution” of Hedegaard and have (quite falsely in Murray’s view) “regularly portrayed him as a bigot”. Hedegaard himself concurs: “You can certainly say that if you are constantly presented as an enemy of the people, as I have been, then you are fair game for any lunatic…. Yes, of course I think it plays a role.”

So we’re back to the same fraudulent argument that Murray deployed against Hope Not Hate. According to this reasoning, Islamophobes like Hedegaard should be allowed to incite hatred against Muslims without restraint and bear no responsibility at all for the racist violence that results from their demonisation of a vulnerable minority community. But point out the indisputable fact that Hedegaard is an anti-Muslim bigot and you’re directly to blame for any violent actions to which he might be subjected.