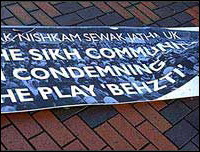 “Picture this scenario. A new play opens in London that centres around taboo issues relating to religion. For argument’s sake, a rape in a Sikh Gurdwara. Protests follow, ‘community leaders’ demand it be shut down and some threaten legal action. Six months ago, when the Behzti play controversy blew up, those threats of legal action amounted to hot air.

“However if the government’s bill to outlaw religious hatred passes through its third reading next week, those empty threats would suddenly become very real. In essence Labour aims to reward the MCB (Muslim Council of Britain) with a piece of legislation in return for the Muslim vote during the election.”

The level of ignorance displayed by opponents of the Racial and Religious Hatred Bill never ceases to amaze. It seems to have escaped Sunny’s attention that Sikhs, as members of a mono-ethnic faith, are already covered by the ban on incitement to racial hatred in the 1986 Public Order Act. If it could be reasonably argued that “Behzti” incited hatred against Sikhs, then a prosecution could have been brought under Section 20(1) of that Act, which states:

“If a public performance of a play is given which involves the use of threatening, abusive or insulting words or behaviour, any person who presents or directs the performance is guilty of an offence if –
(a) he intends thereby to stir up racial hatred, or
(b) having regard to all the circumstances (and, in particular, taking the performance as a whole) racial hatred is likely to be stirred up thereby.”

The Racial and Religious Hatred Bill merely seeks to amend that section of the 1986 Act by substituting “racial or religious hatred” for “racial hatred”. This would have the effect of extending its provisions to cover members of multi-ethnic faiths, such as Muslims or Hindus. If the Bill becomes law, the opportunities for Sikhs to persuade the Attorney-General to prosecute a play like “Behzti” will be … precisely the same as they are at present.