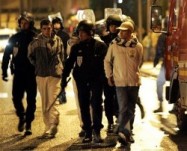 “Lax immigration policies, prostration to the god of multiculturalism, and the refusal to fight fire with fire are three reasons why Muslim ‘youths’ in Paris are rioting in the streets. As I see it, the religion of Islam is inherently incompatible with the concept of individual liberty, a crucial component of western countries. It’s no accident that a culture like the West and a nation like the United States were envisioned and created by people who were either Christians and/or biblically literate and/or respected the Christian tradition. In countries under Islamic law, there’s no such idea as ‘individual liberty’. You’re either a Muslim or in danger of having your throat sliced open.”

This analysis is wholeheartedy endorsed by Robert Spencer, who heads his post “French rioters continue to prove multiculturalist relativism a dismal failure”. It appears to have escaped Barber’s and Spencer’s attention that official state policy in France is resolutely anti-multiculturalist, requiring as it does the subordination of minority cultures to the dominant French “national” culture. But never let facts get in the way of a right-wing cliché, eh?

Right-wing deputy Philippe de Villiers, leader of the Mouvement pour la France, who has said he wants to “stop the Islamization of France”, told RTL radio that the problem stemmed from the “failure of a policy of massive and uncontrolled immigration”.