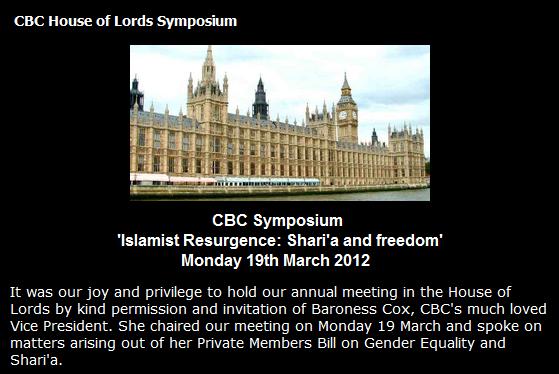 It turns out that the meeting at the House of Lords on Monday where Baroness Cox made her hysterical claims about the threat of sharia law was the annual symposium of the Christian Broadcasting Council, of which Cox is vice-president. It was titled “Islamist Resurgence: Shari’a and freedom” and Cox was billed as speaking “on matters arising out of her Private Members Bill on Gender Equality and Shari’a”.

A CBC press release reporting on the symposium omits Cox’s most inflammatory comments, as quoted in the Sun and the Mail, but does contain some interesting additional details. Sharing the platform with Cox at the symposium was none other than former Bishop of Rochester, Michael Nazir-Ali. According to the press release: