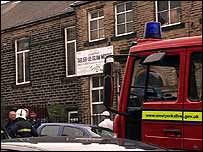 A fire which severely damaged a Bradford mosque just before Friday prayers is being treated as suspicious by police. The blaze at the Jamiyat Tabligh Ul Islam mosque in North Side Terrace, Lidget Green, caused the ceiling on the first floor of building to collapse. Firefighters said it was believed to have started in an upstairs room.

Mosque president Mohammed Rafiq Sehgal discovered the fire 15 minutes before prayers were due to start at 1300 BST. He said a children’s homework club had finished less than an hour earlier and only two people were in the building at the time of the fire. “I think we’ve had a very lucky escape,” said Mr Sehgal. “It is very lucky that all the children had just gone home.”