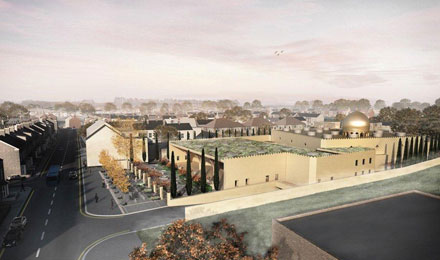 A campaign against a mosque planned for Cambridge has claimed its dome is deliberately designed to “dominate” the skyline.

Homes have been leafleted by opponents of the Mill Road Islamic centre – leading some residents to claim the leaflet is whipping up antagonism against the city’s Muslim community. The anonymous publication brands the centre a “megamosque” and claims it will cause massive traffic congestion, late-night noise and disturbance to residents.

It also says the mosque’s dome will “overshadow” nearby homes because it is “twice the height of neighbouring houses”. The leaflet claims the building is “intended to overbear its surroundings and to send a message of physical and numerical dominance”. The flyer asks: “Does Cambridge need a megamosque?”

During Ramadan, it says, traffic will build up so much it will be “impossible for emergency vehicles” to gain access to neighbouring Brookfields Hospital and Arthur Rank Hospice, claiming 3,000 worshippers would attend.

Plans were last month submitted for the new mosque to replace the one on Mawson Road.

Kate Morris, 40, of Suez Road, said: “I was shocked to find the leaflet on my mat. I object to the fact that it referred to a ‘megamosque’, whatever that might be, and frankly don’t believe the claims that it will have 3,000 visitors and swamp our streets with extra traffic. I am very happy that a place of worship and study centre are being built on the site. Much better that than another supermarket or industrial estate.

“But what angered me the most was the fact that the authors chose to remain anonymous. Are they ashamed of their views? This is an underhand attempt to whip up local antagonism against a group who are proposing to turn a derelict area of the city into something much better.”

The three-storey building on the site of the former Robert Sayle warehouse will eventually cost £13 million. A city council consultation is under way on the designs, which include a prayer hall with capacity for about 1,000 people and the dome. Other facilities include a mortuary, library café, teaching area and two homes.

Sarah Elgazzar, a spokeswoman for Cambridge Muslim Academic Trust, said: “Everybody deserves a say and we welcome that but they have to be accurate and this campaign is making some inaccurate claims. The dome is well set back in the building and certainly has not been designed to dominate the area.”