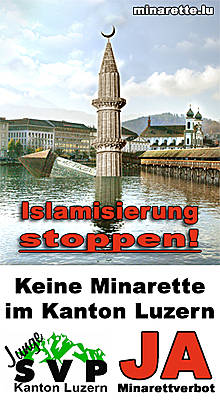 In Switzerland, home of the referendum, voters decide on everything from reducing fighter jet noise in tourist areas to boosting funding for complementary medicine. Although generally of narrow interest, even at home, once in a while, a plebiscite comes up that stirs passions well beyond national borders. That will be the case on Sunday, when voters decide on a call to ban construction of minarets at mosques.

On the face of it, the referendum is of negligible relevance, even by Swiss standards. The country has few mosques and fewer minarets. Only a tiny fraction of Switzerland’s 300,000-400,000 Muslims, drawn largely from the Balkans, are practising; most mosques are inconspicuous and there is scant demand for minarets. Any building schemes are subject to the same planning procedures that limit skyscrapers.

But, as with immigration and citizenship rights, the vote has touched a sensitive nerve – one with resonance elsewhere in Europe. Immigration, integration and the dilution of national identity have become big themes in the UK, France, Belgium and beyond. Recently, they have grown even more prominent because of recession and spiralling unemployment. Far-right groups have exploited popular unease to boost representation and influence agendas. Austria’s two far-right groups took more than 28 per cent of the vote in elections last year.

Sunday’s vote is typical of the Swiss People’s party (SVP) – the ultraconservative group that regularly and expertly exploits national emotions to mobilise support. Reinforced by simple, yet striking images and terse, but effective language, the SVP has become Switzerland’s biggest party.

SVP leaders maintain they are simply performing their duty to protect Swiss national values. They say minarets have no religious significance, but symbolise Islamic intolerance. Warning against a creeping “Islamisation” of society, Ulrich Schlüer, an SVP MP, notes: “The anti-minaret initiative is particularly important for the younger generation. The young will be the ones particularly affected if Islamisation comes off.”

The SVP’s message has been conveyed with arresting and provocative images. Building on previous emotive – and widely criticised – posters, the latest campaign has been galvanised by a poster of a woman in a burka, standing on a Swiss flag, flanked by minarets looking like missiles.

Opinion polls suggest the initiative will be rejected comfortably, even if the margin appears to be narrowing. But even if Sunday’s vote goes against the SVP, observers say the damage for Switzerland may already have been done.

Writing on his Telegraph blog, Damian Thompson has mixed feeling about the introduction of a similar referendum in the UK: “A legal ban on the construction of a certain sort of building strikes me as a very un-British, top-down solution. Giving local people the right to decide whether they want a minaret in their midst, on the other hand, is very British. But what if the locality is a Muslim ghetto? I wish I could say that last question is hypothetical, but increasingly it isn’t.”