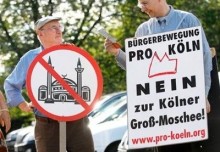 Europeans are increasingly lashing out at the construction of mosques in their cities as terrorism fears and continued immigration feed anti-Muslim sentiment across the continent.

The latest dispute is in Switzerland, which is planning a nationwide referendum to ban minarets on mosques. This month, Italy’s interior minister vowed to close a controversial mosque in Milan.

Some analysts call the mosque conflicts the manifestation of a growing fear that Muslims aren’t assimilating, don’t accept Western values and pose a threat to security. “It’s a visible symbol of anti-Muslim feelings in Europe,” says Danièle Joly, director of the Center for Research in Ethnic Relations at the University of Warwick in England. “It’s part of an Islamophobia. Europeans feel threatened.”

The disputes reflect unease with the estimated 18 million Muslims who constitute the continent’s second-biggest religion, living amid Western Europe’s predominantly Christian population of 400 million, Joly says. The clashes also represent a turnaround from the 1980s and ’90s, when construction of large mosques was accepted and even celebrated in many cities. “I think the tide has turned,” Joly says.

Indicative of the change:

• Supporters of the Swiss referendum collected enough signatures two weeks ago to call for a constitutional ban on minarets, the towers used to call worshipers to prayer. No date has been set for the vote.

• Italy’s Interior Minister Roberto Maroni announced this month that he wants to close a Milan mosque because crowds attending Friday prayers spill onto the street and irritate neighbors. In April, the city of Bologna scrapped plans for a new mosque, saying Muslim leaders failed to meet certain requirements, including making public its source of funding.

• In Austria, the southern province of Carinthia passed a law in February that effectively bans the construction of mosques by requiring them to fit within the overall look and harmony of villages and towns.

• Far-right leaders from 15 European cities met in Antwerp, Belgium, in January and called for a ban on new mosques and a halt to “the Islamization” of European cities. The group said mosques act as catalysts for taking over neighborhoods and imposing Islamic ways of life on Europeans.

“We already have more than 6,000 mosques in Europe, which are not only a place to worship but also a symbol of radicalization, some financed by extreme groups in Saudi Arabia or Iran,” Filip Dewinter, leader of a Flemish separatist party in Belgium, told Radio Netherlands Worldwide at the conference.

Dewinter criticized a mosque being built in Rotterdam, Netherlands: “Its minarets are six floors high. These kinds of symbols have to stop.”

Although the group in Antwerp represented minority political parties from Belgium, Austria and Germany, its cause resonates elsewhere.

Construction of a mosque in Cologne, Germany, drew protests from residents last year and sparked a political debate in Berlin over concerns that it could overshadow the city’s great Gothic cathedral.

See also “Not in my backyard, say an increasing number of Germans” in Spiegel Online, which reports: “The planned construction of over 180 mosques in Germany is mobilizing right-wing xenophobes but also an increasing number of leftist critics. They fear the Muslim places of worship will facilitate the establishment of a completely parallel society.”

The article quotes Mina Ahadi, a German-based member of the Worker-Communist Party of Iran, who claims that there are “more than enough mosques in Germany”. According to Ahadi: “When a mosque is built the result is that greater pressure is placed on women, and even more children are forced to wear a headscarf to school, which leads to isolation.” She accuses German politicians of “boundless naiveté” in their dealings with Islamic organisations that, she argues, “ultimately want to instate sharia law”.