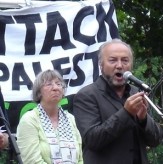 Over at Pink News we’re treated to another of Benjamin Cohen’s favourite “Muslim homophobia” scare stories, this one courtesy of Peter Tatchell, who attacks George Galloway for having included on his website a reference to the voting record of Labour MP Jim Fitzpatrick on gay equality.

“George appears to be appeasing homophobic sections of the Muslim community by attacking Jim Fitzpatrick over his support for gay rights,” Tatchell is quoted as saying. “He’s using homophobia to gain political advantage and he is betraying his own past appeal for gay equality…. His apparent volte face is a cynical attempt to win the votes of homophobic factions within the constituency. I’m saddened that he’s using gay rights as a stick to beat his political opponent.”

This statement is quoted from the 14 September issue of the Evening Standard, which to be fair also included the following in its report: “Galloway’s office denies he has changed his position on gay rights and says he doesn’t necessarily disagree with Fitzpatrick’s policies anyway. ‘I don’t think he is doing that’, says a spokesman. ‘He hasn’t changed his mind at all. George has always been in favour of gay rights. He has been entirely consistent and if the website gives a different impression we’ll have to have a look at it’.” Needless to say, this is omitted from the Pink News report.

This contributor to Islamophobia Watch holds no brief for either Galloway or Respect, but it looks to me like one of Galloway’s assistants just copied and pasted Jim Fitzpatrick’s voting record from TheyWorkForYou.com onto the website, including Fitzpatrick’s votes on a range of issues – not only on gay rights but also on banning smoking and foxhunting. (In all consistency, therefore, Tatchell should be accusing Galloway of appeasing smokers and supporters of foxhunting as well as homophobic Muslims.) And then, when the Standard drew their attention to the fact that this might be construed as criticising Fitzpatrick’s voting record on all the issues that appeared on the TheyWorkForYou.com list, those three items were removed.

Galloway’s own entry at TheyWorkForYou.com shows that his voting record on gay rights wasn’t that much different from Fitzpatrick’s. The latter voted “very strongly” for equal gay rights, whereas Galloway voted “strongly”. And, as Galloway’s office pointed out the the Standard, there’s no evidence that he’s changed his position since. But then, you’d hardly expect fair treatment of Galloway – or Muslims – from the likes of Cohen and Tatchell.