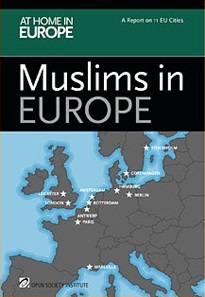 Muslims in Britain are the most patriotic in Europe according to a new study. The report, funded by George Soros found that on average 78% of Muslims identified themselves as British. This compares with 49% of Muslims who consider themselves French and just 23% who feel German.

The findings, based on more than 2,000 detailed interviews, suggest that Muslims may be better integrated in Britain than in other parts of the European Union. The report will reopen the debate about the merits of multiculturalism, a policy that has been criticised as a barrier to integration by Trevor Phillips, chairman of the Equality and Human Rights Commission.

France prides itself on its secular notion of citizenship and has banned Muslim pupils from wearing the hijab, or headscarf, in classrooms. Yet the study, by the Open Society Institute, found only 41% of Muslims in Paris see themselves as French.

The report also discovered that 55% of Muslims across the EU believe that religious and racial discrimination have risen in the past five years.

“There is a disturbing message that emerges from these findings,” said Nazia Hussain, director of the research project. “Even though Muslims overwhelmingly feel British, they’re not seen as British by wider society. That said … there has been a policy of trying to accommodate difference here and it appears to be paying off.”