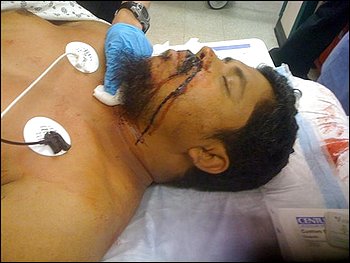 A drunk upstate filmmaker who had recently returned from Afghanistan where he was filming the Marines took his anger out on a cabbie – asking the driver if he was a Muslim before brutally attacking him with a knife, police said.

The attack occurred at about 6 p.m. Tuesday after Michael Enright, 21, of Brewster, hailed a yellow cab at the corner of 24th Street and Second Avenue, police said.

While the two engaged in a conversation, Enright asked the driver, Ahmed Sharif, “Are you Muslim?” Ahmed, 43, responded, “Yes,” according to police.

At one point, Enright greeted Ahmed by saying, “Al salaam aalaykum” – the Arabic greeting meaning, “Peace upon you.” Ahmed replied, “Wa alaikum salaam” – meaning, “And on you be peace!”

“Then, he asked me how my Ramadan was going,” Ahmed told The Post in an interview this afternoon, adding that Enright had a sarcastic tone.

As the cab neared east 41st Street, about a block away from Enright’s destination at 42nd Street and Third Avenue, he barked, “This is the checkpoint motherf—er. I have to f— you up this time,” police said. That’s when Enright allegedly pulled out a silver-colored folding knife and slashed Ahmed in the throat, arm and face through the taxicab partition.

Ahmed was briefly able to lock the man inside the cab, but Enright was able to open the door and run off.

Update:  The New York Daily News quotes a police source as stating that Enright had a personal diary filled with pages of “pretty strong anti-Muslim comments”. Enright described Muslims as “killers, ungrateful for the help they were being offered, filthy murderers without a conscience”.

Further update:  LoonWatch are among those who make the obvious connection between the attack on Ahmed Sharif and the atmosphere of hysterical Islmophobia whipped up by the US Right. They write: “I wonder what goes through the minds of Robert Spencer or Pamela Geller who are making a handsome living inciting Americans against the evil faith of Islam and its suspicious adherents when they see the picture of the 44 year old father above lying in the ER after he was slashed on the job for committing the grand old crime of being Muslim.”

Over at Atlas Shrugs Geller shows us exactly what goes through her mind. Like other right wing commentators, she seizes on the fact that Enright had been working with US troops in Afghanistan as part of an initiative by Intersections International, an organisation that has come out in support of the “Ground Zero mosque”, in order to portray him as a leftist. Indeed, according to Geller, this is proof that Enright “worked for Cordoba/Park 51”.

But why should a leftist supporter of the Park51 development attack a Muslim cab driver? Geller has the explanation: “Clearly this leftwing loon hoped to slash this poor man in pieces, get away, and have the opposition blamed for this heinous and vile crime. This is how low the mentally ill left will go.”

Robert Spencer is only slightly more circumspect: “CAIR and others have not hesitated to stoop even to fabricating ‘hate crimes’. Theywant and need hate crimes against Muslims, because they can use them as weapons to intimidate people into remaining silent about the jihad threat. Was this attack on a Muslim cab driver in New York yet another faked hate crime designed to tar opponents of Islamic supremacism as bigoted people who are fomenting hate? It cannot be ruled out.”