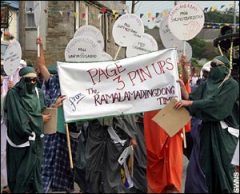 A dispute over an “insulting” carnival procession entry has developed into a row over political correctness.

Locals dressed as Muslims took part in the carnival in the Cornish market town of St Columb Major in protest over plans for a mosque. A group of students visiting the area thought the act was offensive to Muslims, and called in police.

The group, calling themselves the Page Three Beauties from the Ramalamadingdong Times, carried placards with names including “Miss Poppadomistan” and “Miss Reallyamanistan”. A home-made banner read “Join the Kernow Mosk drekly and become a Musli” over a picture of a Cornish pasty. Kernow is the Celtic name for Cornwall, while drekly is Cornish slang for “get it done quickly”. The group knelt down in mock prayer, using fake compasses to “find” the correct direction to locate Mecca.

The stunt was apparently intended as a harmless send-up of the Prince of Wales’s plan for a mosque in his nearby “Surfbury” model settlement. The plan has been criticised because there are only 33 practising Muslims in a population of 22,000.

The students complained to the police and the carnival organisers. Nina Brenton, one of the event’s organisers, said: “We were approached by about six students from out of the area and they thought it was disgusting and offensive to Muslims.

“They had a real go at us and asked how we could allow it in our carnival. We told them it was not up to us to dictate what is offensive unless a group is clearly causing offence. We did advise the group what had happened and gave them the choice of whether to carry on, and they did.”

She said the act was “all in good fun” and involved “just a group of local lads, mostly in their thirties”. She added: “The crowd seemed to love them. It just offended this small minority.”

See also the article “How Miss Slackistan and the Burka Beauties fell foul of the racism zealots” in the Daily Mail, 23 August 2007

Over at the Stormfront fascist discussion list the far right enthusiastically joins in the “fun”, while the British National Party asserts that the evidently rather half-hearted intevention by the police is “just the latest example of appeasement to Islamic sensibilities in OUR country”.