The Islamophobic myth that Muslims are engaged in the gradual but inexorable conquest of the West takes different forms, depending on where you live.

In Tea Party circles in the USA you’ll encounter bizarre conspiracy theories about Muslim Brotherhood operatives having infiltrated the White House or even the top ranks of the Republican Party. In Europe the Islamic conquest myth more usually takes the form of scaremongering over demography – though US Islamophobes promote this version of the myth as well, presenting it as a horrible warning of the fate that will befall North America if it goes down the same road as Western Europe.

A notorious YouTube video entitled “Muslim Demographics” has proved particularly popular in such circles, having so far attracted nearly 14 million viewers. It claims that, as a result of population growth within European Muslim communities, “in 39 years France will be an Islamic Republic” and Germany “will be a Muslim state by the year 2050”.

This paranoid statistical gibberish has been debunked many times, notably by Doug Saunders in his book The Myth of the Muslim Tide: Do Immigrants Threaten the West? But that didn’t prevent The Commentator blog, which is an arm of the neocon-Zionist outfit the Henry Jackson Society, from posting an article last week under the headline “The Islamic future of Britain”. Subtitled “Britain is in denial. If population trends continue, by the year 2050, Britain will be a majority Muslim nation”, the article presents the usual nonsense about demographic change bringing about the downfall of western civilisation.

According to this theory, promoted here by one Vincent Cooper, Muslims have large families as a form of “demographic jihad” through which they seek to achieve numerical domination over non-believers. Cooper quotes Christopher Caldwell’s Reflections on the Revolution in Europe: Can Europe Be the Same With Different People in It?: “Muslim culture is unusually full of messages laying out the practical advantages of procreation. As the hadith saying has it: ‘Marry, for I will outnumber peoples by you.’” He also borrows Caldwell’s quotation from Yassir Arafat about the wombs of Palestinian women being the “secret weapon” in his cause.

Characteristic of Cooper’s lightminded attitude to the statistics he uses in an attempt to substantiate this Islamophobic fantasy is the following passage: “Many British people find it hard to believe their country could become majority Muslim. After all, it was never what they wanted so why, in a democracy, should it be happening? But we’ve had such disbelief before. Back in the 60s and 70s, many people scoffed at the notion that London could ever be majority non-white. But today it is.” Actually, today it isn’t. The 2011 census figures show that white people still make up 60% per cent of London’s inhabitants.

Over at Channel 4’s FactCheck, Patrick Worrall subjected the available statistical evidence on Muslim population growth in the UK to a thorough examination, to see whether Cooper’s claims about a Muslim majority by mid-century stacked up. Worrall’s conclusion? “FactCheck wouldn’t bet on the British Muslim population ever topping 10 per cent, let alone 50 per cent.”

In response to what he sneeringly described as “pathetic criticisms from the hard-Left and its fellow travellers” of Cooper’s piece, The Commentator’s executive editor Raheem Kassam posted an irritable defence of his decision to publish it. Kassam’s article was entitled “Britain won’t be a Muslim majority country”, though why that was so Kassam didn’t bother to explain – he made no attempt to refute Cooper’s thesis. Rather, his defence was that The Commentator merely provided a platform for various points of view, and Cooper’s article didn’t represent the opinion or editorial line of The Commentator itself.

And if you believe that, you’ll believe anything. The reality is that Cooper’s piece was just one in a long line of Islamophobic articles that have appeared on that site. In December 2011 The Commentator published a comment piece by Robin Shepherd, the Henry Jackson Society’s Director of International Affairs, in which he attacked the BBC for failing to blame honour killings on Islam. We described it at the time as “the kind of foam-flecked rant you might expect to read on some extreme ‘counterjihadist’ blog of the sort that inspired Anders Breivik”. Earlier this year The Commentator was responsible for breaking the “story” of the so-called “Muslim patrols” in East London, depicting this isolated stunt as part of a concerted Islamist campaign to “control London streets”.

Nor was his “Islamic future of Britain” diatribe Vincent Cooper’s first contribution to The Commentator. Kassam’s reaction to the murder of Lee Rigby was to publish an article by Cooper, entitled “Islam and Britain”, which used even more inflammatory language than his later piece (“For many British people, the butchery of Woolwich raises questions about what immigration has done to their country”) and introduced his thesis about the Muslim takeover of the UK (“Mr. Cameron says we will never buckle under the threat of terror. But in forty years time, Cameron may be a minority. What then?”).

In addition to his job as executive editor of The Commentator, Kassam is the director of another Henry Jackson Society front organisation, Student Rights. This too has pursued a relentlessly Islamophobic agenda, attempting to portray student Islamic societies in general and FOSIS in particular as extremist organisations that pose a threat to society. Student Rights waged a disgraceful campaign against Sayeeda Warsi because she spoke at a FOSIS conference at the House of Lords earlier this year, and their “research” on this issue provided the basis for a witch-hunting article by Andrew Gilligan in the Sunday Telegraph. Student Rights’ recent publication Unequal Opportunity: Gender Segregation on UK Campuses was widely condemned by students, with one critic describing their research methods as “either shoddy or dishonest”.

Thankfully, it appears that people are waking up to what an unpleasant, pernicious and extremist organisation the Henry Jackson Society is. Articles by Ben Soffa, Marko Attila Hoare and James Bloodworth would appear to have had some effect, with Labour MP Jim Fitzpatrick telling the Huffington Post that he is considering leaving the advisory board of Student Rights. Lib Dem MP Tom Brake, for his part, has resigned from both Student Rights and the HJS.

Even individuals who have made their own not insignificant contribution to the Islamophobia industry are now keen to dissociate themselves from Raheem Kassam, so toxic has his reputation and that of the HJS become. An article posted on The Commentator giving credence to the much-hyped “anti-white racist” bus stop incident in Ashton-Under-Lyne, which was exploited by the English Defence League to whip up hatred against the Muslim community, was the final straw for some people.

Shiraz Maher tweeted that The Commentator had “become a clearing house for the EDL with more anti-Muslim scaremongering”, while Hasan Afzal of British Muslims for Israel denounced the article (which would now appear to have been amended) as “EDL-bait anti-Muslim bullshit” and called Kassam “a fraud and an embarrassment”. It’s not every day I find myself in sympathy with Maher and Afzal’s views, but who could disagree? 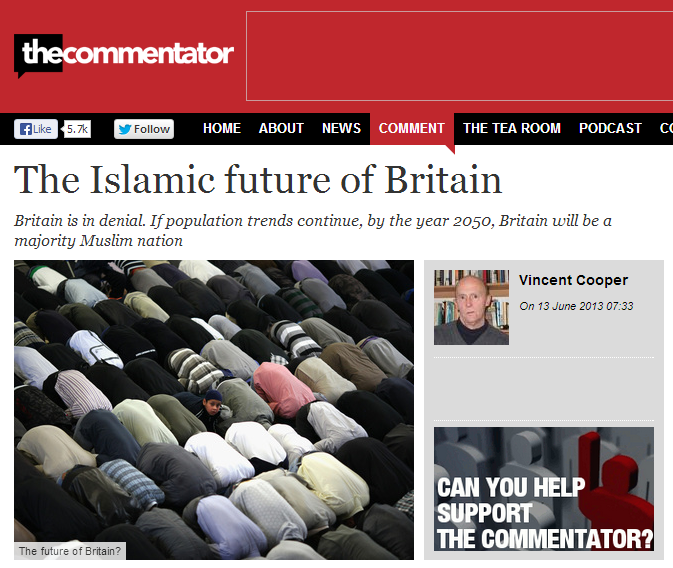