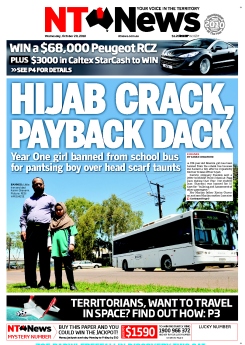 A six-year-old Muslim girl has been banned from a Darwin school bus after she pulled a boy’s pants down after he repeatedly teased her about her hijab.

Iran Ghavami was given a five day ban from Buslink after she sought revenge on the seven-year-old boy, who had been allegedly bullying her and telling her to take off the headscarf, the NT News reported.

The teasing made her “sad and angry at the same time”, motivating the Year One girl to take revenge.

The ban means Iran will be unable to get to her primary school, 30km away from their home in the NT town of Marrakai.

Her mother Lorraine Gerassimopoulos said the ban was a bit harsh for a six-year-old. “We would have preferred a warning so we could have sat down and talked about this incident but they are stopping her from going to school,” she said.

Buslink defended the five-day ban, saying it complied with the Territory’s Code of Conduct for School bus travel. The company did not say if the boy had also faced a ban.